New studio has punch — and smoothies

Laura Leigh Abby, a magazine writer, and her wife, Samantha Abby, a visual content producer, moved from the Upper East Side to Beacon in 2016, determined to bring their passion for fitness to their new home.

Two years and one baby (16-month-old Quinn) later, in January they opened The Studio @ Beacon, a spinning and boxing space at 301 Main St. Located in a former pediatrician’s office and designed by Hudson Design of Garrison, the facility includes a smoothie bar that has become a popular hangout on its own. 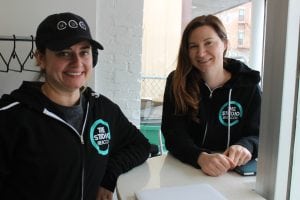 Samantha and Laura Leigh Abby (Photo by A. Rooney)

The goal of the new space is simple, says Laura. Working out should be “exhilarating, motivating and fun.”

The couple, who have been together for a decade, discovered boxing after Sam’s mother died and they were looking for “some kind of physical and mental thing to turn to.” They walked by a gym, went inside and “that was that,” Laura says.

“Boxing is all about power and speed,” Sam explains. “After boxing for the first time at our studio, one woman said she had never realized how much she needed to hit something!” 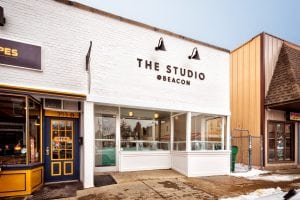 The studio’s signature Bikes and Bags class begins with 30 minutes of cycling, then goes to the mat for core and strength training through bag and mitt work, including punching combinations.

The couple moved to the Hudson Valley after Laura visited Cold Spring while pregnant with Quinn. “It felt like a bit of kismet,” she says. Sam recalls: “Laura told me I would love it there. I did, but we both wanted more of a city feel, and Beacon was perfect. We decided to take a chance.”

“It’s a big goal of ours to attract city transplants and also those born and raised here,” says Laura. “We’re really aware of gentrification and while acknowledging that we’re a part of it, we also want to be a community space.” 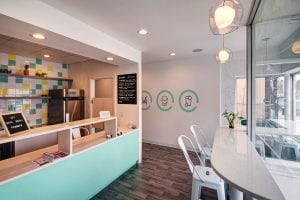 The studio was designed by Hudson Design of Garrison. (Photo by Billy Carpio)

In their first few months in business, the couple have found early morning and early evening classes fill fast. “We tried a 10:45 a.m. class, but people weren’t biting,” says Sam. They were also surprised that more people come to work out when the weather is better.

Asked about the challenge of being married and working together every day, Sam is philosophical. “If you’re going to be yelling at someone, it might as well be at someone you love!” she quips.