When the youngest of the four children of Dawn Scanga became a teenager, the former fashion buyer turned stay-at-home mom decided to reinvent herself.

“I’ve been an athlete my entire life,” says Scanga, who grew up in Cold Spring. “I played softball and basketball at Haldane and I learned more life skills from sports than from any book. There’s a Nike slogan which says ‘If you have a body, you’re an athlete.’ No matter who you are, you train for life.”

Scanga studied exercise science and wellness and became certified as a personal trainer with the National Academy of Sports Medicine. And a year ago, she took over what had been the Route 9 spin-cycling studio called On the Fly and revamped the space as Cold Spring Fitness. It had its grand opening on March 3. 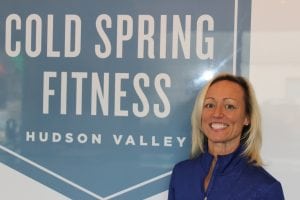 Dawn Scanga (Photo by A. Rooney)

Scanga introduced many new classes and expanded the equipment beyond bikes. The cycles now share space with “The Cage,” where trainers provide one-on-one workouts. The larger front space is where group classes take place, which include Barre (a fusion of Pilates, yoga, ballet barre and orthopedic stretching) and Barre Interval, which is faster and more intense.

There’s also FitNow!, a class designed by Scanga that includes foam rolling and stretching for people “easing back into fitness”; Battlerope Suspension Training, led by José Matos, which uses weighted ropes for interval, cross-training and agility work; Core + Cardio, which uses hand weights; Full Body Blast, Total Body Conditioning and Total Body Toning, which are higher intensity workouts; and Rock Bottom, which focuses on the lower half of the body with ankle weights and resistance bands. 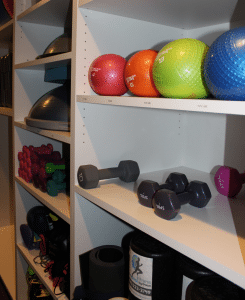 Weights, balls and other equipment fill the shelves at Cold Spring Fitness. (Photo by A. Rooney)

Along with personal training, Scanga is certified in corrective exercise, which focuses on rehabilitation after injuries or surgery. “Corrective exercise got me to be a science geek,” she says. “You also can use it for injury prevention, working opposite muscle groups. Injuries can affect you your entire life.”

She says the business has been a family affair, with support from her husband, John Paul Scanga, and her teenagers. “One of my kids has worked on the marketing flyers, another wipes down the equipment at the end of each day,” she says, “It’s teamwork!”

Drop-ins are $20, and unlimited classes are $129 per month ($69 for students and schoolteachers). Unlimited cycle classes are $69 per month. Cold Spring Fitness also allows members to use the studio to work out when classes are not in session. See coldspringfitness.com or call 845-265-2833.