Philipstown upset with decision to use Garrison firehouse

Philipstown Town Board members last week blasted Putnam County for bypassing the town and its emergency shelter during the first March Nor’easter, for a shelter at the Garrison firehouse, which had to be equipped with cots and other supplies retrieved from across the Hudson River.

At their April 5 formal monthly meeting in Town Hall, board members emphasized that in 2012 the county cooperated with the town when the federal Department of Homeland Security paid for an industrial generator at the Philipstown Recreation Center; that the Rec Center has three Red Cross trailers with enough beds, blankets and supplies for up to 500 people; and that three of five Town Board members are firefighters or trained in emergency response.

But when a violent snowstorm hit the mid-Hudson Valley on the weekend of March 2, the county’s Emergency Operations Center (EOC) called the Garrison Volunteer Fire Company and requested use of the firehouse as an emergency public shelter, said Sandy Bohl, a Garrison Fire District commissioner.

The Putnam County Hazard Mitigation Plan, released in February 2015, emphasizes the importance of the Recreation Center as an emergency shelter. Bohl said that the GVFC informed the county that the Rec Center was already equipped.

Councilor John Van Tassel, a member of the North Highlands Fire Department and the town government’s frequent liaison on emergency response matters, observed that he had made the same point in a conference call with EOC leaders and municipal officials from around the county. After the reminder about the Rec Center shelter, county representatives “just said, ‘OK,’ ” Van Tassel recalled.

Nonetheless, Bohl said, the county repeated its plea to the GVFC to use the firehouse. “We’re going to say ‘yes’ every time because we’re going to help our community and the neighboring communities,” she said. The fire department “left it up to the county” to alert town officials of county plans.

The Red Cross delivered furnishings and the firehouse sheltered two people from Putnam Valley and one from elsewhere overnight, while Philipstown residents dropped by during the day to warm up or get water after their utilities failed, she said. 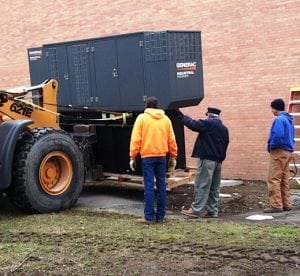 Roger Chirico (center), then the town Highway Supervisor, oversaw the installation in 2012 of a generator at the Philipstown Recreation Center. John Van Tassel is at right. (File photo)

Town Board members commended the GVFC but criticized the county. Councilor Nancy Montgomery called it “a very big problem with Putnam,” while Supervisor Richard Shea described it as “business as usual.”

Montgomery asserted that the county knew of the Rec Center shelter but chose to overlook it. “When they don’t call the supervisor and inform him that they need a shelter in our town,” it raises questions of competency, she said. “Anybody in emergency response [authority] knows the supervisor is the incident commander locally and the fact he was not notified I can’t accept.”

Van Tassel sounded incredulous as he recounted the trucking of Red Cross equipment to the Garrison firehouse despite the presence of the same beds, blankets and supplies at the nearby Rec Center. He said “the part that scares me” is the disorganization that suggests.

Shea added: “It’s aggravating for us, and should be for everyone, because it’s a waste of resources to have the Red Cross bringing things from a county across the river into Philipstown, when it’s already here.”

Kenneth Clair, the acting commissioner of the county Bureau of Emergency Services, did not respond to a request for comment from The Current.

In her State of the County address on March 15, County Executive MaryEllen Odell lauded her administration’s response to the early March storm, which brought deep snow and high winds and caused the widespread loss of electricity and the death of an 11-year-old boy in Putnam Valley killed by a falling tree. In one slide, Odell showed a photo of the Garrison firehouse and saluted the department for providing shelter “in partnership” with the county.