The Beacon Bulldogs varsity softball team is off to a 1-4 start after a 6-2 loss to Lourdes on Wednesday (April 11). Nevertheless, with 12 of his 15 players juniors or seniors, Coach Brian Antalek says he has high expectations for his veteran squad.

Antalek coaches and his wife keeps the stats while holding their infant son. Soft-spoken, he relies on visual cues to communicate with his players. 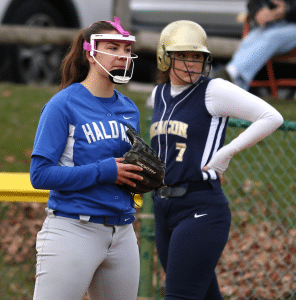 As dozens paraded by the softball diamond at Beacon High School to watch St. John’s recruit Lenny Torres pitch for the baseball team, members on the softball team, their cheeks red from the wind, called out to their teachers to stick around.

Last year the girls’ season ended with a loss at home in the sectional tournament that went down to the final at-bat. Antalek says he believes this year’s team can go further.

He attributes the early struggles to a team finding its identity, and players moving between various positions and getting comfortable.

Fresh off the loss to Lourdes, he said the Bulldogs were “not finding the holes” when at bat. 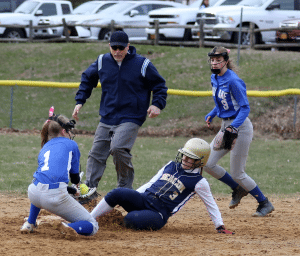 Haldane’s Mary Miklasen (1), a seventh-grader, attempts the tag at second on Beacon’s Madison Scarchilli. Sidney Warren (9) is in the background. (Photo by Scott Warren)

Senior Madison Scarchilli had two hits in the game, including an RBI single that brought home one of the two Beacon runs. A speedster who patrols centerfield, she had two hits and two runs in a 6-4 victory on April 6 over Haldane.

Junior Kamryn Haran, the team’s best pitcher, has good control and a capable bat. One of the highlights against Lourdes was Haran gloving a line drive and doubling off the runner at first.

Savannah Mora, the senior first baseman, is a critical bat in the middle of the order and the team’s defensive leader. Her sister, Marissa, an eighth-grader, catches and bats second.

Davonia Lamar, the shortstop, missed last season with an injury but moved from centerfield to shortstop. She will be a key cleanup batter.

Although Nick Lisikatos has coached the varsity team since 2006 and is a regular in the Section 1, Class C championship game, this season may be one of his most challenging. His roster has not a single junior or senior. 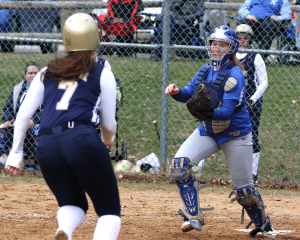 On Monday (April 9), Westlake came to Cold Spring from Thornwood and throttled the Blue Devils, 17-6, to drop them to 1-2.

Haldane scored only one run in the first six innings, a double off the bat of sophomore Shianne Twoguns that rolled to the fence. Twoguns is the team’s most important player as both its starting pitcher and leadoff hitter. In the season opener, an 11-7 win at Briarcliff on April 5, she was 3-for-4 with 2 RBI.

Her catcher is another sophomore, Molly Siegel, who bats third. The team’s other two sophomores are Bela Monteleone, who bats cleanup and plays centerfield, and Sofia Viggiano, who covers right. 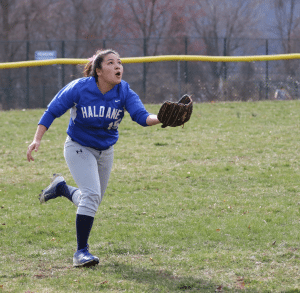 The shortstop is Mary Miklasen, a seventh-grader. Like Hannah Monteleone, who graduated last year, she may well become a six-year starter. She bats second.

Lisikatos coaches with a smile, and continues to instruct his team through each at-bat and defensive situation. “Finish one. Finish on the swing.” “Attack the zone.” His daughter, former Haldane star Chelsea Lisikatos, who went on to play for UNC-Charlotte, keeps the book. 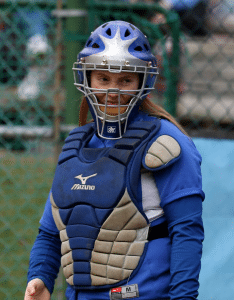 The biggest challenge, according to Nick Lisikatos, is to convince his young players to be leaders. “Baseball, softball — these are tough sports,” he says. “If you have a 70 percent failure rate [at the plate], you’re on track to be a Hall of Famer. The sport takes mental toughness, a thick skin. It’s not for everyone.”