Film will be screened with live music

On Friday, April 27, at the Philipstown Depot Theatre, the long-running Depot Docs series will present One October, a documentary by Rachel Shuman of Beacon.

The film is not a new release. In fact, it was made in October 2008 but did not premiere until April 2017, and it was shown in September at the Beacon Independent Film Festival.

What is different is that the presentation at the Depot on Garrison’s Landing will be accompanied by a live performance of the film’s score by its composer, Paul Brill, and a seven-member ensemble. 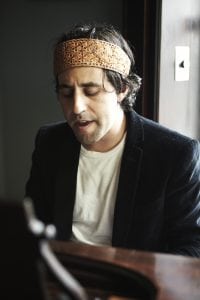 The film is a celluloid time capsule of both the period just before President Barack Obama’s election and a particularly active time in New York City’s ever-changing cityscape. It translates well to the issues of today.

Brill says One October is “easily one of the most rewarding films of my career.” Shuman, he says, wanted a “heavily cello-based, propulsive chamber score,” which he found compelling.

“I usually write and perform broad thematic sketches to present to filmmakers, then record the final performances with live musicians,” Brill recalls. “In this case, we were recording from the beginning, layering the performances and, in some cases, coming up with ideas on the fly.”

The composer says Shuman was “a bit taken aback” when he presented her with finished pieces, because she feared having her cues locked into place.

“I assured her that this was not the case, and we began a slow revision process as we intently honed in on the central voice of the score,” he says. “Rachel’s assiduous attention to detail encouraged me to dig deep into every phrase in each cue. In the end, the process made the score one of the most singular and mindfully intentioned projects I’ve composed.”

He has performed the score live with the film in the past and says the timing is a challenge. “In effect, the film is a runaway train,” he explains. “Missing an introduction to a scene would throw the entire performance into chaos. We spent much time identifying the entry points to begin the cues, and, after a good deal of trial and error, the result was truly exhilarating. We’re incredibly honored to bring the ensemble back together for our performance at Depot Docs.”

Tickets to the film, which includes a reception and Q&A with Shuman, are available at brownpapertickets.com. It begins at 7:30 p.m. The soundtrack to One October and other films scored by Brill can be downloaded at paulbrill.bandcamp.com.