To visit Keith Décent’s basement studio in Beacon is to enter a world of his startling creations, furniture mostly, along with some smaller objects such as lamps made from the broken ends of beams that resemble stalactites and a Japanese pachinko machine destined for a second life as a wet bar stand.

Mostly, though, there is wood. Planks and pieces of it, strips and stripped. Décent, 35, seemingly knows which pile to pull forward to extract just the piece he’s after to complete the transformation of, say, a salvaged bowling lane into a coffee table. 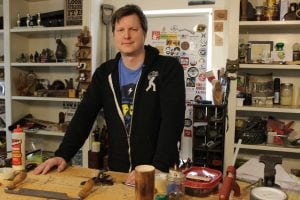 Keith Décent in his studio (Photo by A. Rooney)

The tables and benches Décent crafts are often constructed at angles which shouldn’t work but do. He also makes use of cast iron or other metals, and sometimes a remnant of an object’s past life peeks through.

Décent markets his work with prolific and popular YouTube videos and daily Instagram posts, which he says have also connected him to others “of his kind” who make unusual stuff. (He attended art school but says “it didn’t quite work out.”) His last name is “upcycled” from his surname, McDonald. Facebook deemed the nickname unacceptable for an account until he added the accent. 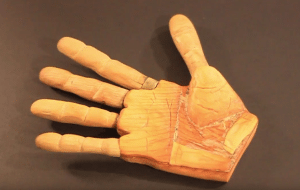 Each finger is a hand tool tucked into the palm base. (YouTube)

Looking for more space, he moved up to Beacon from a Yonkers apartment five years ago. A great-uncle was a set designer and master carpenter. “When he died, in the early 2000s, my cousins and I inherited 12 storerooms full of materials,” Décent recalls. “We threw out a lot, but there was still a lot left. I started messing around. I had always drawn, and it kind of just snowballed from there. I began making things, people liked them, and I shifted to doing some custom work.”

Décent says he “did things in all the wrong ways at first, but discovered I had an aptitude for it. YouTube helped. I wound up watching probably 40 to 50 people doing this type of thing and making videos about it. I had so much stuff to work with, and I like the transformation of something into something else. 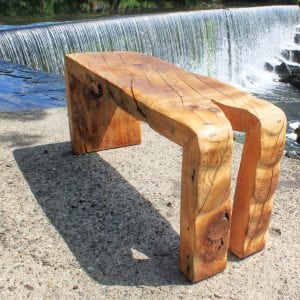 “I started small, working on a piece with antique school-chair legs; I made a top for it, and that got me my first commission,” he says. “I sold another set of chairs to a friend in Brooklyn. He loved what I did and that started everything rolling. I lucked out in that people in my age range were at a place where they were just starting out, in real jobs though, and they needed things.”

Décent’s wife at the time, a nurse, was doing shift work, and between them they were able to care for their children (who are now 4 and 5 years old) while working at different times. 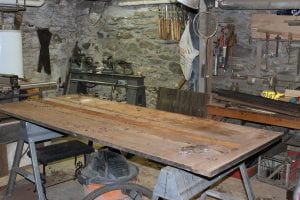 A table under construction (Photo by A. Rooney)

Although the internet has beamed his designs worldwide, Décent prefers to keep it local because pieces are so easily damaged in transit. “If I can’t bring it [to you], I’ll usually forget about it,” he says. “I get just enough work to keep to a timeline. I strive for originality.” He says he can stay motivated working on a table for three months because he knows no one’s ever made one like it before.

Décent’s foray into digital promotion began with a “check out this thing I made” demonstration he posted on YouTube. “It took off,” he says. He also has 21,000 followers on Instagram and lives dangerously as an administrator of the Beacon NY Facebook group.

Keith Décent has a website at keithdecent.com and a YouTube channel. His most popular project there, with more than 20,000 views, is the Dead Edge Hanging Lamp, followed by the Secret Library Shelf,  with 16,500 views.

Décent says the video he is proudest of, although it has only 700 views, shows how he made a set of hand tools with each handle resembling one of his fingers [below].

“I started sharing online because I just wanted to say ‘Hey, I’m doing stuff I don’t see anyone else do, and here’s how,’ ” he says. He tries to use hashtags to limit his Instagram audience geographically, but that’s tougher to do with YouTube, where a video can draw thousands of views if it comes up high in search results for “making a table.”

“Certain things are just very popular,” he says. “Concrete was a while ago, and now it’s mid-century Modern; dining tables are huge. You have to post at the right time.” 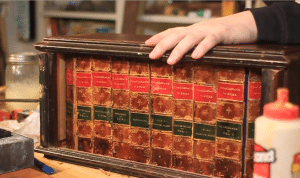 Décent says the online marketing of his art is essentially a second, full-time job. “You always have to have content to post, even if there are days when it’s recycled,” he says. “It’s like a treadmill. And Instagram and the others are constantly changing their rules” about what shows up in search results.

With his hands full, Décent has thought of hiring help but for now continues working for and by himself. “I know where all my tools are, and every piece of salvaged wood,” he says. “I don’t use design software and I do no sketching. It’s all just in the back of my head. I don’t want to learn 3-D modeling because I just know which way I can arrange things, or if I don’t, I like figuring it out. With most of my stuff, I don’t make plans.”