With five members for the first time in 120 years, the Nelsonville Village Board on Monday (April 16) unanimously approved a $320,400 budget for fiscal 2018-19 and ended a dispute with Cold Spring over fire protection charges.

Before taking up other business, Nelsonville swore in newly elected Trustees Michael Bowman and Dave Moroney. They joined Thomas Robertson, an incumbent who won a new, one-year term without opposition, Mayor Bill O’Neill and Trustee Alan Potts on the rostrum. The village had a five-man board initially, but dropped two trustee posts in 1898 for reasons now obscured.

Nelsonville contracts with Cold Spring for fire protection, but in 2016 the villages began sparring over Nelsonville’s portion of firefighter pensions and workers’ compensation costs.

The disagreement ended amicably on Monday when the Nelsonville Village Board unanimously approved a $41,068.52 fire-protection contract for June 1 through May 31, 2019.

In a second 5-0 vote, the board ratified a $42,387.78 fire-protection contract for the 2017-18 fiscal year, which concludes at the end of next month. The document had been in limbo while the municipalities wrangled over details.

Fire protection expenses vary year to year. As outlined by an agreement between Cold Spring and the Cold Spring Fire Company, Cold Spring will pay 52 percent of the total firefighting costs, Philipstown will pay 29.5 percent and Nelsonville will pay 18.5 percent. The amount owed will be calculated after each fiscal year. 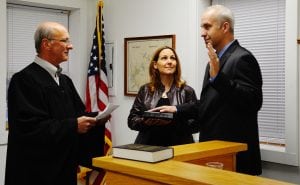 The 2018-19 budget reflects costs from the village’s review of an application for a cellphone tower on Rockledge Road. Last year, Nelsonville budgeted $500 for “codification”; by March 31, it had spent $3,062, largely because of the cell tower document deluge. The 2018-19 budget allocates $2,500 for codification.

There was no increase in spending anticipated for three nitty-gritty municipal needs: $23,400 for street maintenance; $9,400 for snow removal; and $46,800 for street lighting. 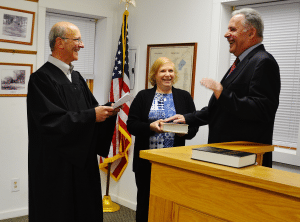 Zenz, left, shares a laugh with new Trustee Dave Moroney and his friend, Donna Steltz, during the swearing-in ceremony. (Photo by L.S. Armstrong)

The board concurred with Robertson’s proposal to consider instituting regulations on short-term rentals such as those booked through sites like Airbnb. “It’s a concern to the people that don’t do it,” said Robertson, citing residents’ complaints.

O’Neill said the village needs to ensure safe lodging for visitors. Looking into the matter “does not reflect xenophobia,” he said. “We’re hoping not to overregulate.”

Nelsonville’s village code allows “the letting of rooms” to up to two guests at once if the owner lives in the house. It prohibits cooking facilities in rooms, although an owner can offer breakfast or other “board” and allow guest access to the kitchen.

On April 17, O’Neill shared a letter with The Current that he wrote that day to Putnam County Sheriff Robert Langley Jr., thanking him for stepping up patrols on Main Street to cut down on speeding.

“As I had discussed with you, I received numerous complaints about speeding in our community,” he wrote. “My own personal observations confirmed that a large number of vehicles were operating at speeds well above the posted limits, posing a hazard to pedestrians and cyclists, especially children. Yesterday at our board meeting, attendees mentioned that they have noticed the increased sheriff patrols and a reduction in speeding. We publicly thanked you and your department for your service to our village.”