Highlights from the April 10 meeting 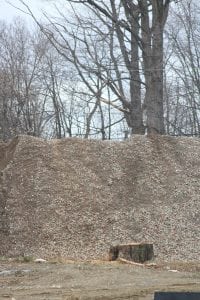 The stump of the Copper Beach at the Butterfield site (Photo by M. Turton)

The iconic European copper beech at the Butterfield redevelopment site in Cold Spring was cut down on March 24. Butterfield Realty, developer of the multi-use complex, had recommended the action based on a report from Garrison Tree. The Village of Cold Spring put a hold on the tree’s destruction pending a second opinion from SavATree. Ultimately, both arborists agreed that the beech was in poor condition and beyond healthy growth. The approved site plan for the project included a protection plan and easement, both of which were intended to safeguard the tree.

Cold Spring Police Department Officer-in-Charge Larry Burke praised Officer Bill Bujarski for the March 17 arrest of a motorist wanted in connection with a hit-and-run in Yonkers. The driver faces a felony charge for two DWIs as well as charges of reckless driving, driving without a license and driving without a court-ordered alcohol detection device.

Burke also commended Putnam County Sheriff’s Investigator Paul Piazza for his investigation and arrest of a 17-year-old who has been charged with felony criminal mischief in connection with vandalism in Nelsonville and Cold Spring on the night of March 31.

The CSPD issued 106 parking tickets and 20 moving violations in March.

The Historic District Review Board will hold a public hearing at 7 p.m. on May 1 at Village Hall to hear comments on proposed amendments to Chapter 64 of the Village Code, which governs historic districts.

Trustees approved an April 18 photo shoot on Main Street by the luggage and handbag company Vera Bradley. The fee was $1,500 plus the cost of having an extra police officer on duty.

The board reappointed Camille Linson as Acting Village Justice through Dec. 31.

Merandy signed a memorandum of understanding with BQ Energy, the firm which plans to install a small hydroelectric generator at the Fishkill Road water treatment plant.

Eric Wirth was appointed to the Zoning Board of Appeals, succeeding Alison Anthoine.

The board approved a craft beer festival, Hops on the Hudson, that will take place at Mayor’s Park on Saturday, June 16.