After winning the league championship with a 13-9 record last season before losing in the second round of the District 1, Class A playoffs, the Beacon High School varsity baseball team is looking to take a step forward this spring.

It will rely heavily on its five returning starters, who include All-American and All-State pitcher Lenny Torres Jr., who has caught the eye of Major League Baseball scouts. The senior righthander and co-captain is joined by senior shortstop and co-captain Justin Conklin, junior catcher Andrew Schneider, junior outfielder Nick Lepere and junior infielder Joe DeCandia. 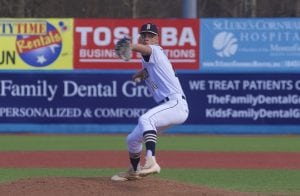 “All of them had a good year last year,“ said Coach Bob Atwell. “They’ll take a bigger role this year, and can help us defend our league championship.”

A number of other solid players are returning from the 2017 squad, he said, such as junior outfielder Mike Manzoeillo, who is batting cleanup, and sophomore pitcher and utility player Besim Dika.

The coach said he has confidence in his hurlers, but they must endure being compared to one of the best high school pitchers in the country in Torres. “He’s been clocked at 98 mph, and is consistently between 93 and 95 with his fastball,” Atwell said. “In 29 years I’ve seen some great players, but this is only the second kid that I’ve seen like this. And he’s got the best arm I’ve ever coached.” 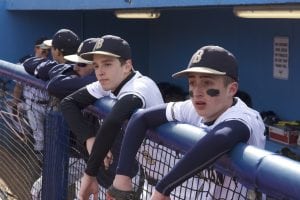 Theo Yannitelli and Nick Lepere in the dugout during the Bulldogs’ victory over Pelham (Photo by S. Pearlman)

Beyond Torres, Atwell is looking for consistency on the mound. “Guys need to step up, our offense needs to extend our lineup a bit, and the guys battling for positions at the bottom of the lineup need to compete,” he said.

Besides DeCandia, who won three games on the mound last season, Atwell will rely on southpaws Lepere and Matt Manzoeillo, and righties Dika, Jayen Lare and Lucas Salcedo. 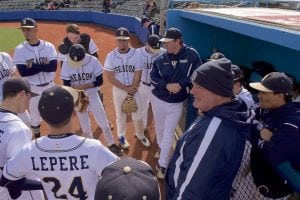 The coaches talk strategy before the Bulldogs take the field against Pelham (Photo by S. Pearlman)

Beacon opened the season hosting its annual Spring Bash tournament at Dutchess Stadium, losing in the championship game to Cornwall, 15-5, after defeating Pelham Memorial by the same score in the opener. Torres struck out five and allowed just one hit in three innings in the victory, and DeCandia earned the win. Dika drove in three runs and Schneider drove in two.

The Bulldogs improved to 3-3 this week, with DeCandia throwing a complete-game, three-hitter against Walter Panas, while striking out 10. Torres and Lepere each had an RBI in that win. Beacon also defeated Hendrick Hudson, 2-0, with Torres allowing only one hit in five innings. Lepere pitched the final 2 innings to earn his first career varsity win. Decandia had 2 hits including an RBI triple to break open a scoreless tie in the sixth, and Mike Manzoeillo also drove in a run.

On Saturday (April 21), the Bulldogs lost to Henry Hudson, 2-0. After giving up two runs in their first, Decandia retired 12 of the next 13 batters. Decandia, Lepere and Matt Manzoeillo had hits for Beacon, who fell to 3-4.

The Bulldogs take on Mahopac at Dutchess Stadium tomorrow (April 23) at 4:30 p.m.