After debate, facility is named after … nobody

Legislators also settled on a name for the facility: The Friendship Center in Philipstown. The center is in the Butterfield redevelopment complex in Cold Spring.

The Audit and Administration and Physical Services Committees both unanimously approved the spending and sent the request to the full Legislature, which meets on Tuesday, May 1. 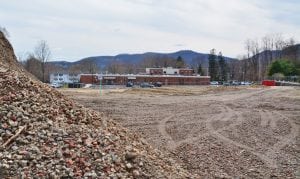 The redevelopment underway at the former Butterfield Hospital property includes transformation of part of the Lahey Pavilion (in distance) into a county senior center. (Photo by L.S. Armstrong)

On Wednesday (April 25), Maureen Fleming, the Kent town supervisor, who hopes to defeat County Executive MaryEllen Odell in November, termed the additional spending “outrageous.” In a news release, the Democrat said dipping into the reserve demonstrates “yet another example of fiscal mismanagement by Odell. The proposed Butterfield senior center is 6,000 square feet in an existing building. Why are the costs so high for this small retrofit?”

After initial bids for renovation came in too high, crews from the county’s Highway and Facilities Department spent three weeks demolishing the interior, laying the rough plumbing and installing drywall.

Fleming charged the project diverted them from roadwork and other assignments.

But John Tully, deputy Highway and Facilities commissioner, told the Physical Services Committee on April 17 that the work produced new, lower bids and, with other cost-cutting, reduced expenses by about $400,000. He said work would be completed by the end of the year at the latest.

Officials repeatedly asserted the transfer, because it was coming from reserves, would have “no fiscal impact.”

According to documents released by the county, the most recent bids for the renovations ranged from $1.365 million to $1.779 million. County data show a $134,000 gap between the $1.231 million in the Butterfield account and the $1.365 million charged by the low bidder, Key Construction Services LLC, of Poughkeepsie.

The $300,000 “is necessary to cover the project shortfall and kitchen equipment, furniture, and furnishings,” Tully stated.

William Carlin, the county finance commissioner, told the Audit Committee that the money “should, according to our latest estimates, take care of the whole project.”

Legislator Barbara Scuccimarra, who represents Philipstown and has spearheaded the project, expressed delight at the committee support. She said on April 19 that she had conferred with Rep. Sean Patrick Maloney’s staff about obtaining federal grants for the senior center so the reserves could be replenished.

In an April 12 Rules Committee session, legislators discussed what to call the senior center and complained that Odell’s request for community input had produced little feedback.

“We did send letters to the supervisor of Philipstown [Richard Shea] and the mayor of Cold Spring [Dave Merandy] and got absolutely no reply,” Scuccimarra said.

However, at the March 1 meeting of the Philipstown Town Board, Scuccimarra asked for suggestions. Board members proposed the center be named for Julia Butterfield, the 19th-century philanthropist who provided money for a Cold Spring hospital.

Legislator Ginny Nacerino remarked that “to name it after one person always seems to cause hard feelings.” Until last year, the senior center was expected to bear the name of Roger Ailes, the Fox News magnate and Garrison resident, who pledged $500,000 for it. But he later withdrew the offer.

Robert Firriolo, the legislature’s lawyer, advised “if you call it the ‘Philipstown Senior Center,’ people might think it’s a town, as opposed to a county, facility.”

So, the committee settled on the Friendship Center in Philipstown, reflecting the title of county facilities in other towns.

One thought on “Another $300K for Senior Center”