A fire in North Highlands emphasized the need for regular maintenance of chimneys that vent wood-burning fireplaces and stoves.

Just after 11 p.m. on Saturday, April 21, the North Highlands Fire Department responded to a call from the residence of Timothy Hall at 95 Esselborne Road. The fire was under control within about an hour and there were no injuries.

The fire was caused by excessive creosote in the chimney, according to NHFD Chief Pat Scherer. 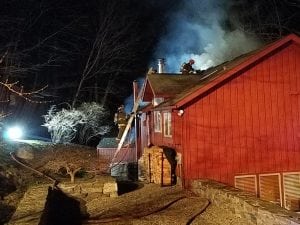 “Buildup of creosote can also lead to a complete blockage of the chimney causing carbon monoxide to backup into the home,” which can be deadly, he wrote in an email.