A general contractor shares his art

Fred Schlitzer claims many influences for his art, which is on display at McCaffrey Realty in Cold Spring through Sunday, May 6. Those influences include Van Gogh, the abstract expressionists, multimedia artist Red Grooms and Peanuts.

“I don’t like knocking things out via a formula,” explains Schlitzer, 59, a general contractor who lives in Cold Spring. “There are common threads in my work, but I’ve never been locked into one style.” 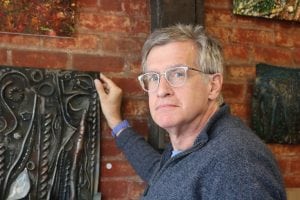 He grew up in Pottsville, Pennsylvania, and remembers disliking school, although he loved sports and “my highest grade was always in art.” After a teacher encouraged him to consider art school, he enrolled at nearby Kutztown University.

“I had a lot of catching up to do,” he recalls. “I was finding my way, like a singer finds his voice. Once I did, it was no longer school to me — it was just something I loved.” 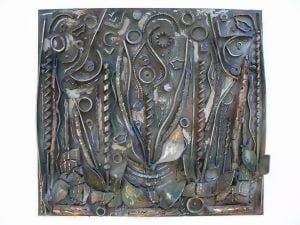 Schlitzer realized it was unlikely he would be able to support himself with his art, so he looked for a career that allowed him to at least work with his hands. After he and his wife, Mary, a native of Wappingers, moved to the Highlands from Washington, D.C., in 1993, he trained in welding and metalwork at Tallix Foundry in Beacon and Metal Concepts in Cold Spring.

Sometimes Schlitzer’s worlds overlap, such as when he brings a sketchbook to a job site so he can draw at lunch. Recently he noticed the sandpaper he was using resembled part of the Mojave Desert he’d seen from a plane, so he glued it to a board, incorporating it into the art. 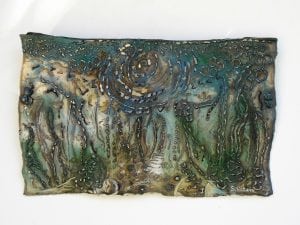 Besides working on his home, which was built around 1907, Schlitzer is creating a sculpture for Collaborative Concepts at Saunders Farm in Garrison. He has contributed to the annual outdoor show, which is held in August, for the past decade.