As the long-running discussion over placement of a cell tower in Nelsonville appeared to inch toward conclusion, the latest proposed designs prompted a new wave of criticism and a warning from the state.

The Zoning Board of Appeals scheduled a session on the tower at Philipstown Town Hall for 7:30 p.m. on Monday, April 30. The developers, Homeland Towers and Verizon Wireless, need a special-use permit from the ZBA and might also need variances for height or proximity. The project must also obtain site-plan approval from the Planning Board. 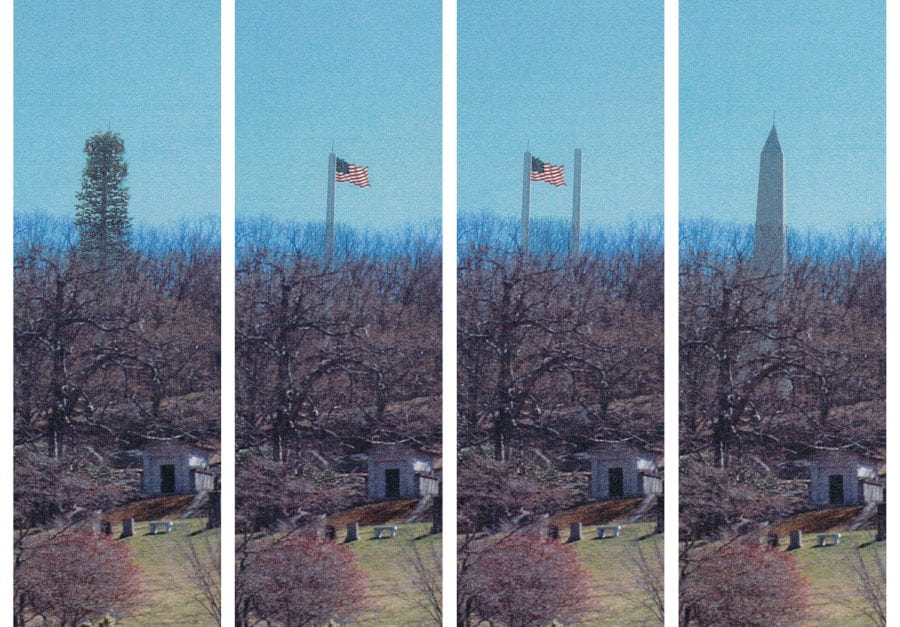 The developer has proposed a monopine; a flagpole; a flagpole with a second pole; and an obelisk. This view is from the gatehouse at the Cold Spring Cemetery. (Homeland Towers)

The tower’s proposed site, on Rockledge Road, overlooks the Cold Spring Cemetery. In an April 16 letter to Nelsonville officials, the state parks department said that two of the designs “would have no adverse effect on the historic resources” of the cemetery.

John Bonafide, director of the Technical Preservation Services Bureau, said the agency could accept a tower disguised as a 110- or 120-foot flagpole as long as it is “painted in a neutral, sky-based color to minimize visual intrusion;” had no flag or other attachments; if its height never increases; and no more equipment is ever added. The agency also could accept a fake fir “monopine,” he wrote.

The 125-foot obelisk creates problems, he wrote. For example, it would be much larger than necessary and passersby might mistake it for a real monument and try to reach it, creating safety and security risks. 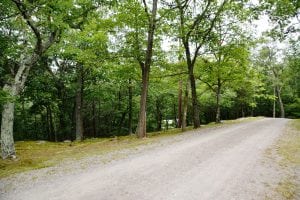 The proposed cell tower would go a tract of land roughly in the area off to the left, on Rockledge Road. (Photo by L.S. Armstrong)

In a 54-page report, a grassroots organization, Philipstown Cell Solutions, urged the ZBA to deny the special-use permit. “Any looming structure at 110 feet would destroy the sanctity and beauty of this historic cemetery and destroy this important viewshed forever,” the group wrote.

It dismissed the 110-foot flagpole as an eyesore; noted that the 120-foot flagpole and the 110-foot double towers would violate village laws on height or distance between such structures; and expressed concern because obelisks were erected after the Civil War as Confederate memorials and could evoke memories of “a troubled past” when the Ku Klux Klan operated in Philipstown.

“That such a monument stands on the verge of approval in this application should shock our collective conscience,” Philipstown Cell Solutions charged.

The Philipstown Town Board on April 11 opened, and carried over to May 2, a hearing on Homeland Towers’ appeal of the refusal of the town Conservation Board to grant a wetlands permit for a cell tower proposed for Vineyard Road, near the intersection of Routes 9 and 301.

Neighbors claimed that intermittent streams lace the area, often making it very wet and unsuitable for a tower. Robert Gaudioso of Homeland Towers responded that the wetlands permit only involved a driveway. He warned that continued denial of the permit, preventing Homeland from accessing the tower site, likely constituted a legal “taking.” Alleged municipal taking of private property is often cited as grounds for litigation.

After the Zoning Board of Appeals on Jan. 22 denied Homeland’s request for a special-use permit, Homeland and its partner Verizon filed a 72-page complaint in federal court. On March 19, a town lawyer filed a response denying each of the lawsuit’s allegations, without elaboration.

The ZBA on April 23 unanimously approved plans for construction on Sky Lane of a Pamal Broadcasting tower to serve WHUD radio and provide enhanced wireless communications. It will replace an existing tower.

After neighbors expressed concern about potential damage to the lane, Pamal agreed to set aside $30,000 for any necessary repairs.

At an April 4 meeting, Robert Gaudioso, Homeland’s lawyer, said his company still favors the monopine. At any rate, he said, “we’ve done everything that could possibly be done” to make the tower acceptable. “We don’t have anything to add.”

Philipstown Cell Solutions disagreed, proposing that Homeland explore other sites, such as the Butterfield redevelopment on Route 9D in Cold Spring. On Feb. 14 the Cold Spring Historic District Review Board approved placement of a cupola containing telecommunications equipment on a pending Butterfield residential building.

Click here to read letters to the editor from opponents to the tower.

Before the demolition of the hospital and revamping of Lahey Pavilion, the complex contained rooftop cellular devices, and the Butterfield developer told the review board wireless companies have asked to return.

But Gaudioso said on Feb. 27 that Butterfield does not work for Homeland and Verizon. “We could come up with a hundred what-ifs,” he said. “The shot clock is meant to make things happen.”