In 2016, Main Street in Beacon got a block shorter when The Hop, a restaurant and bar that exemplified a craft beer renaissance, suddenly closed. Since then the expansive storefront on the east end has been dark.

Now, the block is back. A new craft-beer pub, the Melzingah Tap House, is scheduled to open this week.

Its owners, Kevin and Dana Collins, have deep Beacon roots. They opened The Barking Frog on Route 52 near the outskirts of town in 2001, when Dia:Beacon was still an old Nabisco factory. Much of Main Street was boarded up. 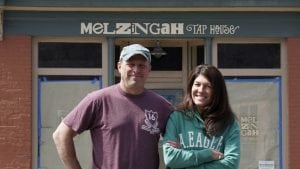 “Beacon exploded in what seemed like overnight, even though I know it took much longer,” says Dana Collins, who with her husband also owns The Publick House in Pleasant Valley. “We felt like we missed the boat. Even though we were only a minute away, if you’re not on Main Street now you might as well be in Timbuktu.”

The couple were frequent diners at The Hop. The building was put up for sale, but it was only when it was offered for rent that the Collins began considering starting a restaurant there. Its menu will aim for what the couple calls approachable, recognizable pub food with surprising upscale twists thrown in.

“We might do fish and chips,” said Dana, “but instead of a big piece of cod, it’ll be smelt, under a pile of awesome fries.”

The bar will have 22 taps in rotation and a canning machine for takeout.

What’s in a Name?

Kevin and Dana Collins chose to call their new restaurant the Melzingah Tap House as a conversation starter. There’s the story about the word that everyone knows and the story behind that story.

In 1913, when Matteawan and Fishkill Landing merged, officials decided to call the new village Melzingah to honor local Native American tribes. After the name was ridiculed by New York City newspapers, village officials opted to instead name the municipality after Mount Beacon.

However, melzingah doesn’t come from any Native American language. As Algonquin elder Evan Pritchard has explained, it was a Dutch play on an Algonquin word — word-play being something white settlers did all over the Hudson Valley.

Pritchard believes melzingah has its origins in the slender island at the base of the waterfalls in what is now Madam Brett Park. The Munsee tribe referred to the island as M’singwe (muh-sing-way), referencing the “little people” of the forest, spirits that could not be seen.

The Munsee believed the island was a sacred, supernatural place. When Madam Brett built a mill there, she referred to it as “Fairy Island” to honor that belief. The Dutch referred to the area as Melzingah, which Pritchard believes is a playful merging of M’singwe and muhle-zinger, which is Dutch for “mill singer,” a reference to the lyrical sound a mill makes.

There’s a reference to this part of the story in a mural by Joe Pimentel that takes up one wall of the Melzingah Tap House. The mural shows the mill and the waterfalls of Beacon, with industrial pipes and gears stretching out through the ages to form a microphone in front of a female singer.

One could interpret that as an homage to how Beacon’s industrial past gave rise to its current cultural renaissance, but Kevin Collins likes to look at it a different way.

“I like to think of her as Madame Brett,” he said. “Singing back to her mill across time.”

The couple hopes to open on Monday, April 30, in part because they told people they would open in April and partly because Dana claims to like Mondays. “If you start a new project on a Monday, or exercise on a Monday, it sets a good tone for the rest of the week,” she says.

She raises her voice to be heard over the whir and buzz of power tools as her husband and his crew continue to work. “Did you hear that everyone?” she shouts. “We’re opening on Monday!”

Once the pub is up and running, the couple will work on a biergarten space out back. For a while, they will leave managing The Barking Frog and The Publick House to others.

“I want to be here every night so that I can meet every single person who walks in the door,” said Dana. “I want to introduce myself and welcome them and thank them for coming.”