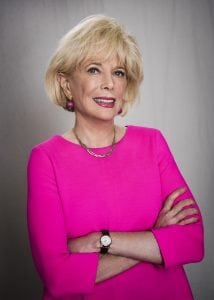 Lesley Stahl has been a CBS reporter since 1972 and a 60 Minutes correspondent since 1991. On May 4, the Desmond-Fish Library in Garrison will honor her at its annual awards dinner.

You covered Watergate. How does that compare to what’s going on now?

I have a sense of déjà vu, especially with the reactions of the Republicans. People think the Republicans turned on Nixon fairly early. But they stayed in a little circle, protecting him, until the tape came out on which he admitted he was part of the cover-up. Boy, you see them circling the wagons around Trump, too! Obviously the threat of firing the special prosecutor is similar, which Nixon did. The focus on the charge of corruption for Trump is drip, drip, drip. Watergate wasn’t a steady drip. There were long intermissions when nothing happened.

You’ve written that covering Watergate made you aware of how a president’s personality can affect history. Does that apply to Trump?
He’s no different, he just has a larger personality. Every president, in his own way, brought his temperament to bear on us. When I covered Jimmy Carter, the lights in the White House never went out. He was a micromanager, and it created a sense of nervousness. When Reagan came in, it felt as if overnight things settled down. He’d seen it all, this too shall pass. His calm interior affected everybody.

60 Minutes premiered in 1968. What’s the secret to its longevity?
It hasn’t changed. It’s the same as it’s always been, and it’s comforting, and people trust us. We approach whoever we interview with dignity and respect. I watch these polls about how people are losing faith in journalism, but they’ve kept their trust in us. I also think our protected Sunday time slot is a part of it, I can’t deny it. We don’t do surveys to see what stories people will watch. We come up with our own that we personally are desperate to cover. It’s wonderful to work there, which is why few people leave.

How do you feel about the state of journalism?
I’m pessimistic. I so worry about journalism on the web. Everything’s fragmented. I worry about paying journalists enough money to draw the best and brightest. And I worry about people only reading stories they want to read, instead of being a little challenged, the way people who read newspapers are. Our system of government needs an adversarial press. Look at what’s happening now with President Trump’s cabinet members and the vetting that the press is doing. We’re finding things they should have found. We’re there to cleanse. We’re essential. And if no one believes us, the system’s in trouble.

How about for women journalists?
It’s been slow going. In my naivete, I thought, the door’s open, we’ll prove ourselves, and we’re on our way. We proved ourselves and still had to climb mountains. Maybe it was necessary that we had to earn our way, and maybe it had to take years, because no one can say we jumped the line because of affirmative action. I just did a story on pay inequality. This has nothing to do with journalists, but it’s stunning to learn that waitresses are tipped less than waiters are. There’s something inherent in the system that pays women less. It’s hard to change that, but the pressure needs to stay on, and we need more women in the executive suites.