Coming from Arlington district, where he was deputy

The Haldane school board has named an administrator from Dutchess County as the district’s new superintendent.

Philip Benante will succeed Diana Bowers, who plans to retire on June 30 after four years in the Haldane position. Benante has been the deputy superintendent of the Arlington Central School District in Lagrangeville for the past five years. 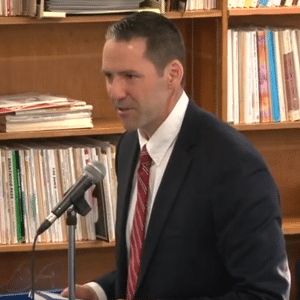 Philip Benante addresses the board on May 1. (Visual Touch Media)

Benante, 38, who has been with the district for 15 years, has also been a fifth-grade teacher, an elementary school principal and an assistant principal at the high school in the Arlington district, which is about 10 times larger than Haldane.

“We are very excited to have Dr. Benante join us,” said school board President Laura Hammond at the Tuesday (May 1) meeting, after the hire was announced. He will begin July 1.

In an email, Hammond said the board was impressed by Benante because he already has experience as a superintendent, as well as “a strong curriculum background, experience with K-12 and a thorough and thoughtful entry plan.” He also is “motivated and student-centered,” she wrote. 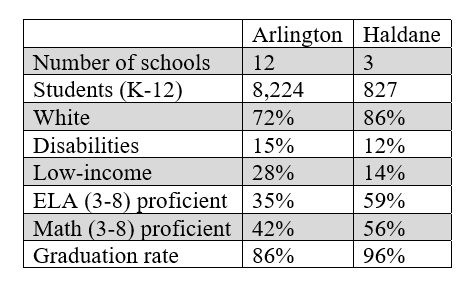 Addressing the board on May 1, Benante said, “To say I’m excited is an understatement.” He said during the search process he had observed that Philipstown was “a close-knit community” that “prides itself on an enriching academic experience.”

“You’ve given me an incredible opportunity,” he said. “I would expect you to expect a lot of me.”

In an interview on Thursday, Benante added that he plans to “spend a lot of time listening and meeting with people both inside — teachers, staff, board, students, parents —and outside of the schools — business owners, residents, faith leaders — to hear about their experience and how we can strengthen and build upon those relationships.”

Asked about the challenges of moving to a much smaller district, he said, “sometimes smaller school districts are faced with unique challenges as far as resources. I’ll work closely with Dr. Bowers and Laura Hammond to understand the dynamics.”