An argument has been made that golf was born not in Scotland in the Middle Ages but in Yonkers in 1888. John Reid and a group of friends known as the Apple Tree Gang played three holes in a cow pasture, which led to the formation of Saint Andrews, the oldest continuously operated club in the nation. In 1890 the country’s first golf resort, Hotel Champlain, opened at Bluff Point. And in 1895 its first public course, Van Cortlandt Park, opened in the Bronx. 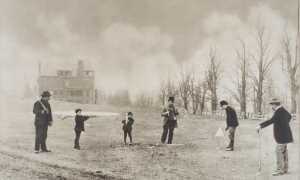 Golfing in Yonkers in 1888: John Reid is at the far right.

In 1916, the Professional Golfers Association of America was founded in New York City, and the first PGA championship was held that year in Bronxville.

In Golf Digest’s most recent biennial ranking of the 100 best courses in the U.S., three of the top 10 are in New York: Shinnecock Hills (4) and National Golf Links of America (8), both in Southampton, and Winged Foot in Mamaroneck (10). The top course near the Highlands is Hudson National in Croton (85).

Three well-known course designers were New Yorkers: Walter Hagen (born in Rochester), Robert Trent Jones (who emigrated from England and began his career as a caddy), and Robert Trent Jones Jr., who with his father created nearly 1,000 championship courses.

A Course Steeped in History
Guide to Local Links