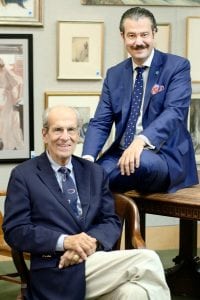 George Lowry, who has a home in Garrison, is the chairman of Swann Galleries in New York. His son, Nicho, is the president. The two men will run the Riverside Art Auction on Saturday, May 12, to benefit the Garrison Art Center.

How did you get into the business?

George: When I got out of the Army after the Korean War, I went to work for IBM. My father-in-law owned the Argosy Bookstore, and he was related to Benjamin Swann, who founded Swann Galleries. Swann wanted to retire, and I was getting sick of the computer business. I loved the mathematics of the auction business, and the contact with people. The original podium was just a crate we turned over, and I remember conducting an auction with my two children playing under it.

Nicho: I ran away from the family business for as long as I could, but at age 26 decided to give it a shot. It’s a wonderful, fascinating industry with history, curiosity, beauty, culture and interesting people.

What makes a good auctioneer?

George: I hate to say that there’s nothing to it, because I don’t want to minimize what a clever fellow I am. But I’m good with numbers, and I’m a ham.

How do you change the energy if  bidding is slow?

Nicho: You can try to make a joke, but there’s no way to change the mood so much that someone will bid on something they don’t want. Auctions can be monotonous. It behooves an auctioneer to keep the crowd from falling asleep.

George: Nowadays you can have an auction with no one in the room, because people bid with their computers and phones.

Have you ever wanted to bid in an auction you were running?

Nicho: Oh, frequently. I have a room with 13 paintings in it, each of which I bought at the Garrison auction. At one auction I walked away with a laundry hamper filled with Beanie Babies, about 300 of them, and for eight years anytime children came over to visit, they’d leave with three or four.

How do you bid as the auctioneer?
Nicho: It’s easier to do in a casual auction like at Garrison. I taunt people and say, “I’m bidding on this.”

George: The auctioneer has no advantage. You have an obligation to your customer, the consignor of the item, so if someone is willing to pay more than I want to pay, I have to sell it to him.