‘Passive’ houses and parks that flood

The economic downturn of 2008 killed Scenic Hudson’s plans for an eco-friendly convention center at Long Dock Park in Beacon. It might have been a blessing in disguise.

The massive storm surges that accompanied Hurricane Irene in 2011 and Superstorm Sandy in 2012 left the park under a foot of water, and while the convention center would have been designed to withstand severe floods, maybe it’s better that the plans were scrapped.

“Even our building over there, which is flood resistant, with no electrics low to the ground, still took in a foot of water,” says Nava Tabak, who oversees climate and science issues for the nonprofit, pointing to the historic Red Barn. Fortunately, the building has been designed for quick recovery. The walls on its first floor can be easily removed to dry the interior.

Climate change has made it nearly impossible to build anything on the banks of the Hudson without a plan for midcentury, when rising sea levels are expected to transform what we currently think of as catastrophic flooding into what high tide looks like twice a day.

For Scenic Hudson, it presents an opportunity to demonstrate what a 21st-century waterfront park might look like. 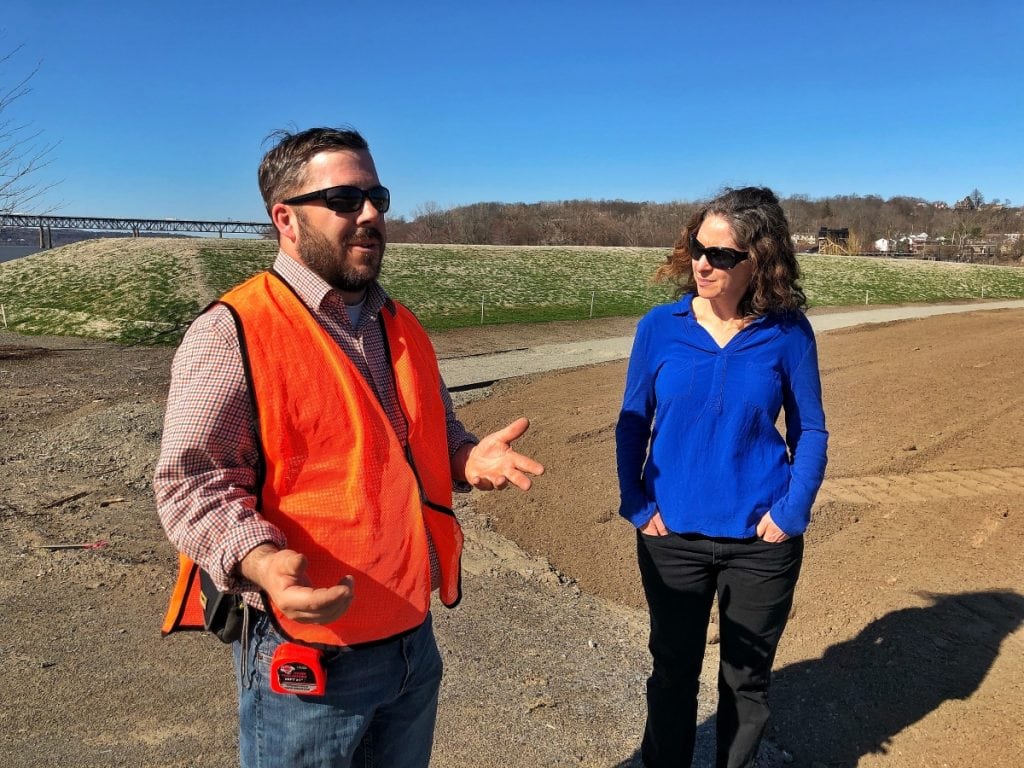 Joe Kiernan and Nava Tabak at Long Dock Park in Beacon (Photo by B. Cronin)

Long Dock Park is built on fill — it was added to the shoreline to make it easier for ferries and merchant ships to access the city’s factories, serving, in effect, as a “long dock.” As the boom years faded, the land became a wasteland of auto salvage and refuse that many older residents recall as an unauthorized playground. Tabak says years of soil remediation were required before Scenic Hudson could even think about a park.

Its first section opened in 2011, with construction on its final section expected to be completed within months, depending on how fast the grass grows. “We want the lawns and everything to be well-established before we expose them to foot traffic,” says Joe Kiernan, the park’s project manager.

The park is designed to withstand flooding caused by storm surge (sea-level rise is a different challenge; models of extreme sea-level rise show the park mostly submerged by 2100). Instead of a concession stand, the park has space for food trucks, which can drive away before the water rolls in. The kayak shed withstood both Irene and Sandy because the surge flowed through its grate-like walls. “The floods came in with debris and mess, but the shed was fine,” says Kiernan. 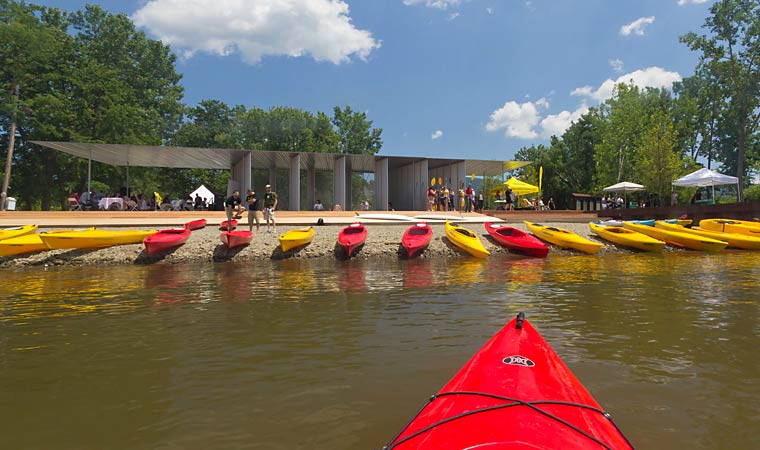 Long Dock’s landscaping has also been designed to mitigate flooding. High berms direct water to wetlands and swales that dot the property.

“Once the water’s here, you don’t want it just flowing through and scouring and eroding everything,” explains Tabak. “You want to keep it, let it percolate, and let it flow out as slowly as possible.”

The land was seeded with vegetation that can withstand flooding, such as switchgrass, goldenrod and wild rye. When the tall grasses die back in the winter, they decompose and help nourish the soil, which in turn makes it more absorbent.

Kiernan and Tabak note that one of the surest signs that the park has developed into a healthy ecosystem is the abundance of wildlife that can be found hiding in the tall grass, sometimes steps from passing joggers: deer, fox, herons and egrets flock to the vernal pools and temporary marshes that appear after heavy rains.

As river communities consider how to protect their shorelines from the effects of rising temperatures, Kiernan argues that accepting, directing and absorbing floodwaters is a better choice than seawalls and other barriers. “When you do that, the wave energy is just going to travel and impact somewhere else,” he said.

Home of the future

Downriver, in Cold Spring, Laura Bergman has come to the same conclusion.

“I’m tending the shoreline because no one else will,” she says as she prunes vegetation near her waterfront home. “Some people from Albany” — presumably from the state Department of Environmental Conservation — “told me they wanted to do something that involved removing the trees. I told them my property was off limits.”

Bergman bought her house at the entrance to Dockside Park in 2012 and planned an extensive renovation. Then Sandy came, flooding the park and house and destroying a Quonset hut on the property. Soon after, she met James Hartford, who with his wife, Juhee Lee-Hartford, has an architecture firm in Cold Spring. 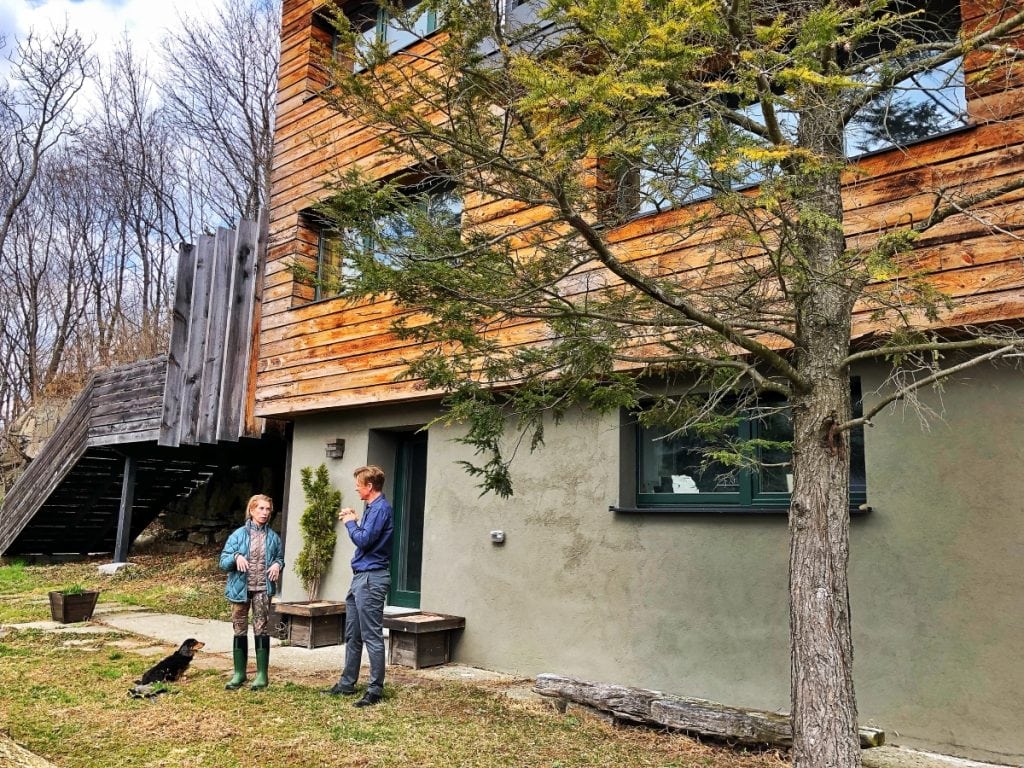 Laura Bergman and James Hartford outside her home overlooking Dockside Park in Cold Spring (Photo by B. Cronin)

He told her she should consider a “passive” house. “When I explained passive housing to her, she said ‘Why would I want to do it any other way,’ ” says Hartford.

Passive housing refers to designing a house to have as small a carbon footprint as possible by minimizing mechanical inputs for heating and cooling.

Hartford says the design is vital to combating climate change. “Buildings consume almost 50 percent of our total energy in this country,” he says. “People are focused on the fuel efficiency of cars, but whether you’re driving a Prius or a Hummer, once you get home and turn them off, they’re the same vehicle. You don’t leave your vehicle running overnight, but we leave our houses running all the time.”

By living in a home that stays cool and ventilated in the summer and warm in the winter thanks to airtight design and superior insulation, he says, residents will be able to shelter for days during emergencies in which the power is out and HVAC devices are offline. 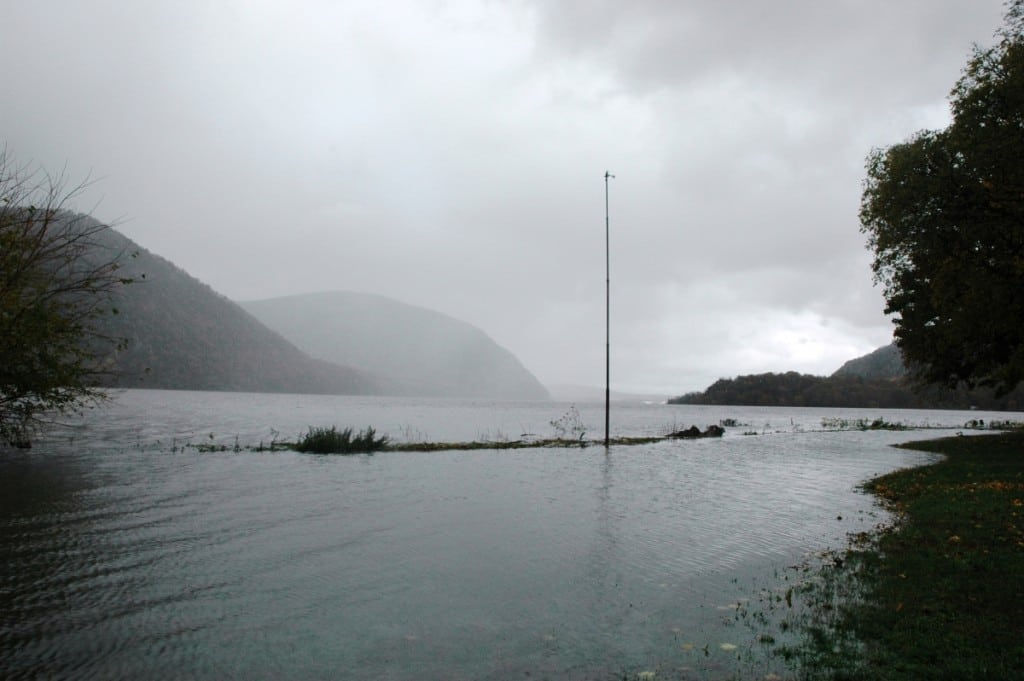 To prepare for flooding, Hartford installed a foot of rigid insulation over the existing concrete slab, then added another 4 inches of concrete, raising the lower floor by 16 inches. “If Sandy comes back, she’ll be lapping at the doorsill but won’t get in,” he says.

As in the Red Barn at Long Dock, all of Bergman’s outlets and electrical equipment are positioned high. Vapor barriers block moisture and, unlike Sheetrock, the cement board siding is resistant to mold. There’s also no furnace for the water to destroy: the home is powered by an 8-kilowatt photovoltaic array of solar panels. Bergman’s monthly power bill is a $25 service charge.

Even after all that, should the water rise too high, Bergman has a Plan B.

“I have my kayak,” she says, pointing under the porch. “I can just float away.”