This spring was another season of progress, and growth, for the Beacon High School girls’ lacrosse program.

The Bulldogs picked up their second win of the season on Monday (May 7) with a 12-10 win over Keio Academy in Purchase. Tessa Nilsen led Beacon with six goals, Katelyn Rosa added three, and Grace Affeldt, Olivia Lynch and Victoria Albra each scored once. Keeper Skyler Kurtz had eight saves for the Bulldogs.

Beacon’s other win, a 15-5 victory over Yonkers, came early in the season.

The remainder of the spring has not been easy, with 12 losses, including a tough 8-7 loss at Ardsley on Tuesday and a 17-10 defeat to Sleepy Hollow in the last game of the season on Thursday. 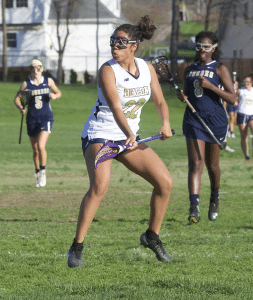 The Bulldogs — in just their eighth season as a team — graduated eight seniors from last year’s squad and have no junior varsity. But Coach Brian Lange, in his fifth year, said he has been pleased with their effort, especially since most of the 30-member squad are freshman and sophomores.

“This group was resilient,” he said. “They practiced hard, made adjustments and focused on getting better. We could see the progress from game to game. We did much better against teams the second time we saw them.”

“Brianna is a natural leader, a go-getter,” Lange said. “She gets the girls hyped up, she communicates. She’s a fantastic leader. And Grace and Lila are the same way — they lead by example, and they spend a lot of time understanding the game and their jobs. They’re always focused on what to do to make the team better.”

Nilsen, a sophomore who is the team’s leading scorer, “has been huge for us,” said Lange. And Beyoncé Otero, a freshman, “is an absolute workhorse. Her stick work has improved tremendously.” 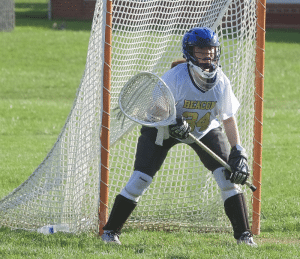 Despite the losses, Lange was encouraged by the squad’s consistently positive outlook.

“The thing I’ve been most impressed with is their attitude,” he said. “It’s tough when you play teams with programs that have been around for years, and that have JV programs. They still had fun, and were still focused.”

To keep the players motivated, Lange and his assistant coach, Diane Tanzi, set goals such as achieving certain numbers of quality shots and defensive stops. “It’s not easy to have to fight every minute of every game and get very few wins,” he said. “But they are getting great game sense and continuing to gain experience.”

The Bulldogs did not earn a spot in the playoffs but have summer clinics and camps ahead. And all but two of the players will return in 2019.

“That’s the beauty of having such a young team,” Lange said. “We’ll be playing together for a few years, and I see good things happening.”