Wendy Creighton is editor of The Fassifern Guardian in Boonah, Queensland, Australia. Like The Current, it is a weekly newspaper with a circulation of about 3,500. I stopped in for a chat last month while visiting my son. 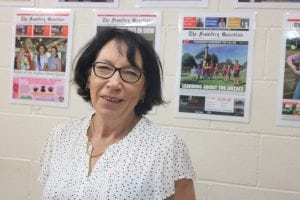 How would you describe Boonah politics?

What are the major environmental issues?

Our economic base is farm production, especially vegetables and beef cattle. But this is also an area of great biodiversity. We’re still arguing over climate change and to some extent I can understand that; local knowledge has been passed down through five generations of farmers. Fracking for gas was once an issue but we managed to fight that off. Flash floods are a concern. The most recent one killed five people.

Rugby League is most popular, as opposed to Union League or Australian Rules Football. Soccer is also big. Cricket used to be huge. There was a time when every district had a team, but not so much now.

You’ve been the paper’s editor for 33 years. Is it difficult to report the news when you know everyone?

It’s easier. You build trust. You build a network. The challenge is finding stories and not using “filler.”

I love your accent. Why is it so strong?

I don’t have an accent. You do.