Storm King: ‘Glad to be part of conversation’

The Storm King Art Center doesn’t often hold group exhibitions. With the many sculptures and installations on its 500-acre campus in New Windsor, it’s not easy to add work on a temporary basis. Its last such undertaking, Light and Landscape, was in 2012.

Now it has asked more than a dozen artists to address climate change. The exhibit, Indicators, opens Saturday, May 19, and continues through Nov. 11.

The parameters provided to the artists by curators Nora Lawrence and David Collens, and their assistant, Sarah Diver, were broad. 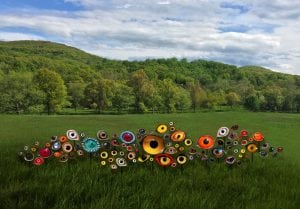 “We asked the artists to respond to our site and express how climate change has related to them personally,” Diver says. “We’re looking to a generation of artists to help in understanding what can be a massive issue.”

Although Storm King was envisioned as a museum devoted to Hudson River School painting, by 1961 its founders had committed to modern sculpture. Early purchases were positioned near the museum building. However, with the 1966 purchase of 13 works from the estate of sculptor David Smith, Storm King began to place works throughout the landscape. 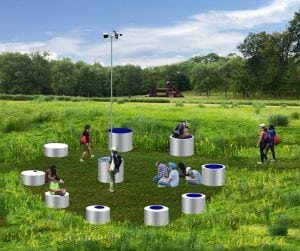 Today the center’s rolling hills, woodlands and fields of native grasses and wildflowers provide the bucolic setting for more than 100 sculptures, including one by Maya Lin (best known for her Vietnam War Memorial in Washington, D.C.), whose Storm King Wavefield is seven parallel rows of swelling peaks. It is installed in what was once a gravel pit used to quarry materials for the New York State Thruway.

Diver says that because Storm King is an outdoor gallery, and the environment has a direct impact on its exhibits, “the dialogue between art and nature has always been important here.”

John P. Stern, Storm King’s president, says that from the beginning, “we have prioritized environmental projects, including land conservation, reclamation of industrial sites for sensitive landscaping for art, using native plants, and preservation of wildlife habitat corridors in the Hudson Valley.” But he says Indicators is intended to also speak to broader issues of ecological health.

Adds Diver: “It’s about taking something local, having it speak globally. We’re glad to be a part of the conversation.” 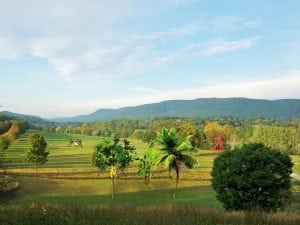 See stormking.org for workshops, activities and lectures during the exhibit. The Storm King Art Center is located at 1 Museum Road in New Windsor. Its hours through Sept. 1 are 10 a.m. to 5:30 p.m. from Wednesday to Sunday, and until 8 p.m. on Friday and Saturday.