Lenny Torres Jr. is chasing a dream, and on June 4, he’ll find out just how close he has come.

That’s the day of the Major League Baseball draft, and the Beacon High School pitcher is considered the 51st best player among the top 100 prospects, according to MLB.com. (Other mock drafts rank him higher.)

A finalist for the USA 18 and Under national team last year and an All-State selection, the right-handed senior has been drawing interest from pro scouts all season, with dozens attending Beacon games with radar guns to measure the speed of his pitches.

He plans to play for St. John’s University next year, but major league teams are eager to sign him up. 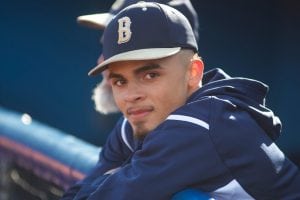 “The number of scouts is one thing, but the type of scouts is a different thing,” says his father, Lenny Torres Sr. “There are about eight or nine levels, and we’re seeing the top level at his games.”

Torres Sr. says while the family has been having a blast with the process, it’s also bittersweet. “It will be the end of his high school career,” he says. “It’s all happened so fast. We see new faces every week, and the interest is getting more intense as we get closer to the draft.”

The Bulldogs finished the season 12-10. Ranked No. 8 in Section 1, Class A, they begin the playoffs today, hosting No. 9 Tappan Zee.

Lenny finished with a 4-1 record and a 0.20 earned-run average. In 34.2 innings, he struck out 75 with 11 walks. His fastball has been clocked at 98 mph but is typically in the 94 to 96 mph range. He also throws a slider and a changeup; his curveball and cutter are being refined. 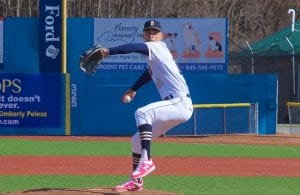 Lenny struck out 75 batters in 34.2 innings this season. (Photo by S. Pearlman)

Beacon Coach Bob Atwell says he has been impressed with his star pitcher’s mindset and work ethic, as well as his skills.

“Lenny has proved a lot, and he will prove more,” he says. “Some MLB pitchers aren’t throwing 98 mph. And he’s a leader, humble. He has the personality to deal with it extremely well.”

Atwell credits Lenny’s parents. “His mom [Ana] is a former student of mine,” he says. “It’s a great family, and great people who he’s grown up with.”

Lenny began receiving instruction from pitching coaches at age 9, his father says, and at 14 teamed up with Angel Lugo at Extra Innings in Wappingers Falls. He also credits strength and conditioning coach Lou Torres from Triumph Strength and Athletics in Beacon for his son’s development.

If chosen high enough in the draft, Lenny could skip college and head straight to a minor league team. “All options are open,” says his father. “I have a feeling we’ll hear his name in the first or second round. I’ll probably pass out. I know he’s in a good position, and hopefully can play the game at the next level. When the moment comes, we’ll know it’s right.” 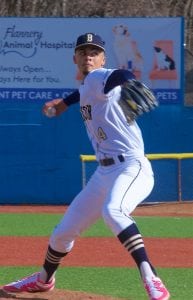 Ray Fagnant, a scout for the Boston Red Sox, was at Dutchess Stadium earlier in the season watching Lenny pitch.

“Our job is to find guys who will be in the big leagues in four or five or six years,” he explained. “Lenny is very athletic, with a good arm, a knack for pitching, and he competes well. And he’s certainly physically gifted.”

But Fagnant said what impressed him most was Lenny’s improvement since his junior season. “He improved his delivery, he throws strikes, he mixes three pitches, and he’s shown he’s worked hard. We also look for intangibles, and Lenny comes from a good family. He’s just a good kid to be around.”

The scout said he tells prospects to enjoy the game. “We all grow up wanting to be in the big leagues,” he said. “But it’s so difficult. The most important thing is to have fun for as long as you can, no matter what level you’re at.”

Lenny, who grew up rooting for the Yankees, said he is ready for whatever comes next. “Of course it would be awesome to hear the Yankees call my name,” he says. “But no matter what team it was, I would certainly play my hardest. It’s a dream to be drafted.”