In 2016, Isabella Nocerino was like almost every other teenager on the planet. She didn’t know what she wanted to do over the summer, much less long-term.

A family friend suggested she register for the Beacon Youth Police Academy, a free weeklong course created a year earlier by Joe and Christine Galbo. Surprised but inspired after going through the academy, she enrolled less than a year later in the more intensive Town of Fishkill police cadet program, where she trains weekly as she prepares for a career in law enforcement.

“Isabella has this sense of community service now and wanting to make an impact,” says her mother, Donna DeLuca. “She’s learned to be calm and cool in stressful situations, too. She has an affinity for this, even though she didn’t know it before she participated in the program.”

Now a sophomore at Beacon High School, Nocerino will be back this summer at the academy, which runs for five days beginning July 16. Applications are available online. The deadline is June 15.

“The program provides the student with the chance to connect with an adult,” says Galbo, who began his career, along with Conti, at the Fishkill Correctional Facility. “It’s a mutual-respect relationship.”

About 60 students have participated in the academy, which has expanded its scope in each of its four years. For 2018, organizers are working with Beacon High School to set up an obstacle course in the gym. Physical fitness, Conti says, is an often overlooked component of the civil service exam that officers must take before they’re eligible to be hired.

Participants also act out crime and emergency scenes — the high school’s Beacon Players troupe helped with last year’s drills — while interacting with other cadets who are further along with their training. Field trips are designed to give trainees a look at various aspects of a career in law enforcement.

Last year students visited the New York State Police Academy in Albany; this year they will travel to the Westchester County Police Department and Westchester Supreme Court in White Plains.

Beacon Mayor Randy Casale says one of his goals when taking office in 2012 was to establish a police youth program, and he reached out to Galbo. “It gives kids structure and team-building — skills that will always be valuable,” Casale says. 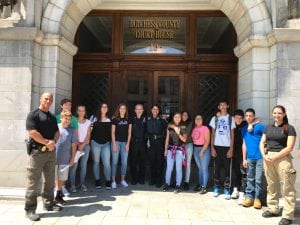 The success of the academy led to the creation of a similar program with the Beacon Fire Department that runs this year from July 23 to 27. Many students attend both, and organizers have suggested the Volunteer Ambulance Corps launch one, as well.

Even if teens opt not to pursue a law-enforcement career, going through the academy can change perceptions — for both officers and participants.

“The kids get much more comfortable with the police,” DeLuca says. “They feel like they could joke with them. Isabella saw the difference; it created goodwill and understanding.”

Conti said he, too, never had as much interaction with teenagers before the academy began. “I’ve had several kids who went through the program come up and talk to me while I’m on duty,” he says. “Before, that never happened.”

One thought on “A Bridge to the Badge”