Haldane grad, 22, was one of 16 Philipstown residents who died in World War II

The memorial installed at the corner of Main and Chestnut streets on the lawn of St. Mary’s Episcopal Church in Cold Spring bears the names of 16 Philipstown residents who died while serving in World War II. Warren Eitner, 22, a Haldane grad, is one of them.

He was a radio man. When his B-17 bomber took off from an airfield in England in October 1943 for a run, he had already taken part in at least 12 missions and knew the risks. The log from a six-hour mission he had flown two months earlier 500 miles into enemy territory recorded the bombers being “battered by [enemy] fighters, coming in sometimes 20 at a time” and how the crew watched 17 of the U.S. planes shot down.

As World War II survivors and their family members die — most are now in their late 80s and 90s or older — their memories of the war and those who fought it pass with them. For Memorial Day, we thought we’d remember one of the 16, with the help of his youngest sister.

The Eitner family — Warren; his parents, Felix and Elsa; his elder brother, Walter; and his sisters, Edith and Dorothy (Dottie) — moved to Philipstown from New Jersey in the 1930s. They lived at Glynwood Farm, where his father ran the poultry operation. 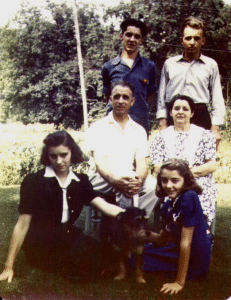 The Eitner family at Glynwood in 1941: Warren is in the back row at left, and his sister Dottie is in the front row at right.

“I was his kid sister, and he loved to tickle me,” recalls Dottie Pfarrer, 89, the last surviving sibling. “We got into some rather wild pillow fights. He was a fun person to be with.”

Their days at Glynwood included square dances in the ice house. “Warren certainly enjoyed square dancing; I can still picture it,” recalls Dottie, who lives in Maryland. Her brother also organized softball games in the back meadow.

Warren and Walter loved the outdoors, especially fishing. But they used their guns only for target practice. “They were soft-hearted outdoorsmen,” Dottie says. “Warren taught me how to identify birds, their nests and their eggs.”

After graduating from Haldane High School, Warren enrolled at Delhi Agricultural School, where he studied poultry husbandry. Dottie says he and their father planned after the war to start their own chicken farm.

Warren embraced college life. He was vice president of the Chanticleer Club, active in intramural sports, ran cross-country and joined Theta Gamma. His nickname, according to the 1940 yearbook, was “Ike” and his pastime was “accompanying chicks.”

While at Delhi, he fell in love with a young woman named Lucy, and they were engaged.

Warren enlisted in the U.S. Army Air Corps in early 1941, continuing a family tradition of military service. His father had served in the Army during World War I, later became commander of the George A. Casey American Legion Post in Cold Spring, and during World War II commanded the Legion’s four Putnam County units of guard, patrol and traffic control officers. 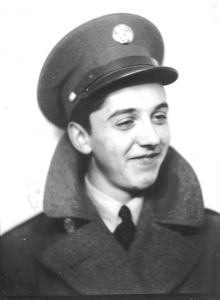 Warren rose to the rank of technical sergeant, serving as a ground-based radio operator with the 306th Bomber Group, known as the Reich Wreckers, at Thurleigh airfield in southeastern England. Between August and October 1943, he volunteered to fly on at least 12 missions as a radio operator.

During his last trip home, while on Christmas leave, Dottie remembers thinking her brother had aged a lot. “He changed so much, from being very impish to very serious,” she says.

Thurleigh was cold and foggy on the morning of Oct. 14, 1943. Aircrews who attended the 3 a.m. briefing hissed and moaned when the target was announced: Schweinfurt.

A Bavarian town nearly 500 miles to the east, its factories produced more than 60 percent of the bearings used in Hitler’s war machines. It was heavily fortified with anti-aircraft batteries and defended by Luftwaffe fighters. On a mission to the area that Eitner had flown in August, 54 bombers were lost and another 169 damaged, five beyond repair.

An intelligence report for the Oct. 14 raid noted: “No trouble was encountered until the P-47 escort left.” The huge Boeing B-17 “Flying Fortresses” could handle long-range missions but its fighter escorts were typically forced to return to England as they ran low on fuel.

Once the fighter escort turned back, German planes pounced. “Between the Rhine and the target, the formation was attacked by 300 enemy aircraft,” the report stated. Although the B-17s were armed with 50mm machine guns, “there were too many aircraft attacking for the gunners to keep them off.” The formation also encountered “accurate” anti-aircraft fire as it neared Schweinfurt. 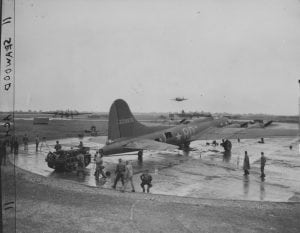 Warren Eitner flew some of his missions aboard the B-17 nicknamed Miss Patricia, shown here. It crashed on a training run about a week after his death, killing the eight crew members. (American Air Museum in Britain)

A pilot who survived the raid said Warren’s bomber and its 10-man crew came under fire from as many as six Luftwaffe fighters when it was about 10 minutes from its target. At 2:15 p.m., one of its four engines burst into flames. The witness counted four parachutes. Another pilot wrote to Warren’s mother after Warren had been reported missing in action and said he had seen seven parachutes, giving the family hope he may have survived and been captured. 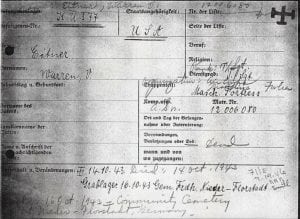 He had not survived. The bomber crashed into the German countryside. Five of the 10 men died, including Warren and the pilot, John Jackson, 22, whose bodies were found at their posts, in the wreckage, by Germans. Warren may have remained on board to radio the positions of those who parachuted. Five of the men who were able to bail out of the aircraft survived and became prisoners of war.

Of the 291 bombers sent to attack Schweinfurt that day, 61 were lost. Another 148 were damaged, 10 beyond repair. 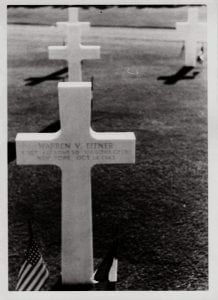 Warren is buried in the Lorraine American Cemetery at St. Avold, in northeastern France, with 10,786 other American soldiers. He was posthumously awarded the Air Medal with V for valor and a Purple Heart.

When Warren’s death was confirmed about two months after he was reported missing, the Red Cross sent a letter to his father. He received it a few days before Christmas but didn’t tell his family until Dec. 26. “I don’t know how he did it,” says Dottie, who was 14. “I think he didn’t want to spoil Christmas.”

After learning Warren had been killed, Lucy gave her engagement ring to his mother.

Richard Pfarrer has his uncle’s wartime blanket, although it’s missing the corner that Warren used to shine his boots.

The Eitner family left the Cold Spring area in 1945.

Thanks to Dottie Pfarrer; her sons, Mark Pfarrer and Richard Pfarrer; and Sue Fox Moyer of the 8th Air Force Historical Society for their assistance. The Eitner photos were provided courtesy of Mark Pfarrer.