I grew up terrified of tornadoes. And, like any kid trying to manage a great dread, I became acutely sensitive to their warning signs: a human barometer. Long before the Indiana sky turned black and the light citrine, long before the eerie stillness was broken by a sudden pelting of hail, I’d have skittered upstairs, grabbed my stuffed rabbit, Marshmallow, and settled myself onto the basement stairs.

One of the joys of moving east was discovering I could enjoy springtime storms. A dark front sweeping toward Manhattan or the Hudson Valley still set my nerves jangling, but I no longer worried that my house would be ripped from its foundations. My fear became an amusement-park-ride thrill, adrenaline minus the danger.

I know I should avoid the phrase the new normal — it’s such a cliché. But it captures the feeling that the fundamental givens of our lives have changed. Weird weather events — bomb cyclones, superstorms, microbursts, April blizzards and Hudson Valley tornadoes — are here to stay. Whether you believe they are caused by climate change or by the wrath of God makes no difference to the outcome. We are all coping with sudden power outages, blocked roads, cancelled trains, lost connections and crashing trees. 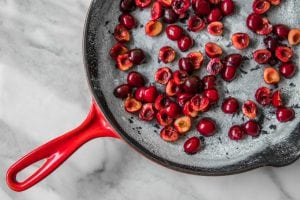 Life is just a skillet of cherries. (Photo by Henry Weed)

Those of us without generators can add to that list refrigerators of spoiling food.

There aren’t many people alive anymore who know how to manage an American household’s food supply without refrigeration. I certainly don’t. But I do know that many of the foods we adore were developed as ways to prolong the life of perishables. Long before the invention of iceboxes, smoke, salt, sugar, vinegar and oil were essential preservation tools. And many of today’s delicacies were once survivalist fare, including salami, smoked salmon, bacon, peppers packed in oil, cornichons, dried fruits and every kind of jam and jelly. 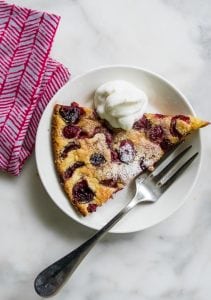 A slice of clafoutis — a cross between custard and cake — pairs perfectly with a dollop of yogurt whipped cream. (Photo by Henry Weed)

Our ancestors also learned to befriend spoilage, and nearly the entire dairy section of the grocery store is testament to their inventiveness. Fresh milk stayed fresh only a few hours. But if you could sour or curdle it, you gave it a modest shelf life: ricotta, sour cream, cream cheese, mascarpone, yogurt, crème fraiche, queso fresco, mozzarella, kefir and cottage cheese, to name just a few.

I take comfort in finding this kind of culinary wisdom woven into our lives — it’s my grownup version of Marshmallow. Last week, I turned to traditional cookbooks such as Swedish Home Cooking and Darina Allen’s Forgotten Skills of Cooking. From Allen, I discovered a way to simmer pork tenderloin in milk and save two ingredients teetering on the brink of iffy after our dry ice evaporated.

I also came across several recipes for clafoutis, a French country dessert made by pouring a custardy batter over fresh cherries. I’d tried it once long ago and been amazed. But over the years, every subsequent version struck me as disappointing, or even gross.

In Tender, cookbook author Nigel Slater writes that a similar frustration prompted him to develop a better recipe. I had cherries, milk, and eggs that needed using up, so I gave it a chance. Of all the meals I cooked last week without power, this and the pork were the best. Necessity may be the mother of invention, but, evidently, frustration and bad weather can transform those inventions into wonders.

Adapted from Ripe: A Cook in the Orchard, by Nigel Slater

This dish is sometimes made with sour cherries, although black cherries are traditional. If you use sweet or Bing cherries, try it with a dollop of yogurt-whipped cream for a wonderful tang.

Heat the oven to 350 degrees. Pit the cherries. If you don’t have a pitter, slice them in half and twist to separate, then pick out the pit with the tip of a knife. Butter an 8-inch cast iron skillet or baking dish, and dust generously with sugar. Add the cherries.

Melt the butter and set aside. In a mixing bowl, whisk together the sugar and eggs. Add the flour, milk  and extracts and whisk to combine. Pour in the butter and beat briskly for a few seconds.

Pour the batter over the cherries. Bake for 35 minutes, or until puffed and golden. Allow to cool slightly, then dust with sugar. Serve slightly warm, with yogurt whipped cream.

Note: if you don’t have superfine sugar, you can make it by whirring regular sugar briefly in a blender — no more than 2 to 3 seconds, or it will become dust.

You can substitute sour cream or crème fraiche for the yogurt.

In a small bowl, mix together the yogurt and sugar or agave until well blended. In a cold metal bowl, beat the cream until soft peaks form. Fold the yogurt mixture into the whipped cream and serve.