Ending 10 months of discussion, including fierce public debate, the Nelsonville Zoning Board of Appeals voted 3-2 on Wednesday (May 30) to deny a special-use permit for a cellphone tower overlooking the Cold Spring Cemetery.

The ZBA members who voted “no” said the 110-foot, pole-like tower would have an “adverse visual impact” and conflict with village law that safeguards scenery.

The two members who voted “yes” cited the possibility of improved wireless service and the merits of making a decision in Nelsonville rather than putting the village at the mercy of a federal court if the applicants file a lawsuit. 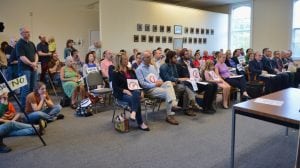 The audience waits at Town Hall on Wednesday night for the Nelsonville ZBA to vote on the Rockledge Road cell tower application. (Photo by L.S. Armstrong)

The May 30 meeting, held at Philipstown Town Hall, drew a standing-room-only audience. Many carried signs opposing the Rockledge tower.

Before voting down the special-use permit, the ZBA unanimously rejected two proposed tower designs. The first was for a tower disguised as a “monopine” fake fir tree and the second for a 120-foot pole.

Homeland Towers also proposed a two-tower configuration; a flagpole; and an obelisk, but the state parks department rejected the latter two. However, it said the a monopine or a pole painted a neutral color would be all right visually. 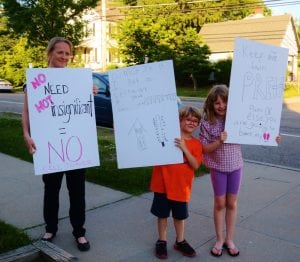 Before the Nelsonville ZBA meeting, Eliza Matthews and her children, Zade and Maisie, expressed their opposition to a cell tower proposed for Rockledge Road. (Photo by L.S. Armstrong)

ZBA member Peggy Clements said that even a single pole still threatens the view. “Access to views is really very precious,” she said. She voted against the permit.

ZBA member Chris Keeley said he was unconvinced the tower was needed because of a crucial gap in coverage, and he agreed that the Rockledge location “undoubtedly has a significant, adverse impact” on its surroundings.

“There’s a lot of reasons” it presents problems, “not the least of which is that it’s right on top of the Cold Spring Cemetery,” he said. Under the zoning code, the Rockledge Road site “clearly is not appropriate,” he added, before voting “no.”

“This tower is probably necessary in this village to give us better service,” Merando said. “I know I’m going to make a lot of enemies, but I vote yes.” 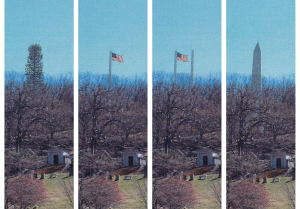 The developer has proposed a monopine; a flagpole; a flagpole with a second pole; and an obelisk. This view is from the gatehouse at the Cold Spring Cemetery. (Homeland Towers)

Rice observed that “everybody has cell phones and iPads, yet there is opposition to a cell tower.” He expressed concern for stay-at-home parents, professionals working from home offices, tradespeople, emergency responders and others who utilize wireless communication.

Rice also pointed out that when Cold Spring Cemetery was created during the Civil War, a prominent neighbor was the massive West Point Foundry — with multiple smokestacks, deforested environs and noise. “I very much doubt” that Foundry executives like Robert Parrott, whose grave is in the cemetery, “would be offended” by a cell tower, he remarked.

Rice said the village had “an opportunity to mitigate the impact of this cell tower by selecting a stream-lined, authentic wireless tower, as opposed to the monopine. Instead of a U.S. court judge dictating our future, I suggest we seize the moment,” he said.

After the meeting, Robert Gaudioso, the Homeland Towers attorney, said he and his colleagues had no comment.

“They will go to court,” predicted Todd Steckler, an attorney for the village.