It’s not alone. As of June, 230 governments in towns and cities stretching from Long Island to the Canadian border had enlisted in the state’s Climate Smart Communities initiative.

Of those, 18 were not only certified, but had reached a bronze or silver ranking after completing additional projects. They include Dobbs Ferry, Kingston and Ulster County (silver) and Cortlandt and Orange County (bronze). No municipality has reached the gold level yet.

The remaining 212 hopefuls include Beacon and Philipstown, the only Putnam County community to participate.

In an attempt to reduce greenhouse gas emissions that contribute to global warming by trapping heat in the atmosphere, New York launched the Climate Smart program in 2009. To encourage municipalities to participate, the state has promised that certification will help win grants.

To join, municipalities must pass measures declaring their intent. Beacon did so in 2009 and Philipstown in June 2017. Next, the local government organizes a task force and appoints a coordinator to tackle assignments on a list of more than 100 projects.

Philipstown’s comprehensive plan, passed in 2006, included many Climate Smart-style goals. In January the town appointed a coordinator, Cold Spring resident Roberto Muller, who earns $500 per month.  The Town Board also sought volunteers, resulting in a 20-member taskforce that will make recommendations to the Town Board, which will make final decisions.

In Beacon, the City Council passed a resolution in 2009 to join the Climate Smart program but has made little progress since. Its Conservation Advisory Committee hopes to have a Natural Resources Inventory completed by the fall that could make the city eligible for Climate Smart grants. City Administrator Anthony Ruggiero said this week that the council was close to naming a Climate Smart coordinator, who would then lead the city through certification.

The Cold Spring Village Board briefly discussed the Climate Smart program in 2012 but went no further. Muller has briefed the Cold Spring board and the Nelsonville Village Board and says he intends to follow up with both. He noted that either village could team up with Philipstown and suggested one task force goal, providing stations for recharging electric cars, is ideal for collaboration.

With the completion of each Climate Smart project, a municipality earns points; it needs 120 for certification. Muller said most communities take two to three years to attain certification.

The tasks include initiatives such as conducting an inventory of how the municipality and the community produce  greenhouse gases and drafting plans to reduce them; installing water-saving fixtures and LED street lamps; initiating employee car pools, upgrading HVAC systems; shifting to solar and wind energy; promoting composting and recycling; planning bicycle and walking paths; and issuing an annual progress report.

“We need to look at where we’re getting our power from, where our electricity is coming from, what kind of vehicles we’re driving and how we’re going to combat climate change,” he said. “I feel like we’re at the last possible moment to try to turn back the tide.

“This is no joke — the storms you see now are not like anything I’ve seen in 56 years,” he said. “Regardless of whether you agree with climate change or the fact that it’s man-made, it’s happening.”

Councilor Mike Leonard, the board’s liaison to the Climate Smart task force, said that as global warming continues, “there will be certain things we have to adapt to. Whether we did them or nature did them, things have happened. The more we start early and work on these issues, the more choices we have. The longer we wait, we’ll be forced to do things we’re not going to be happy with.” 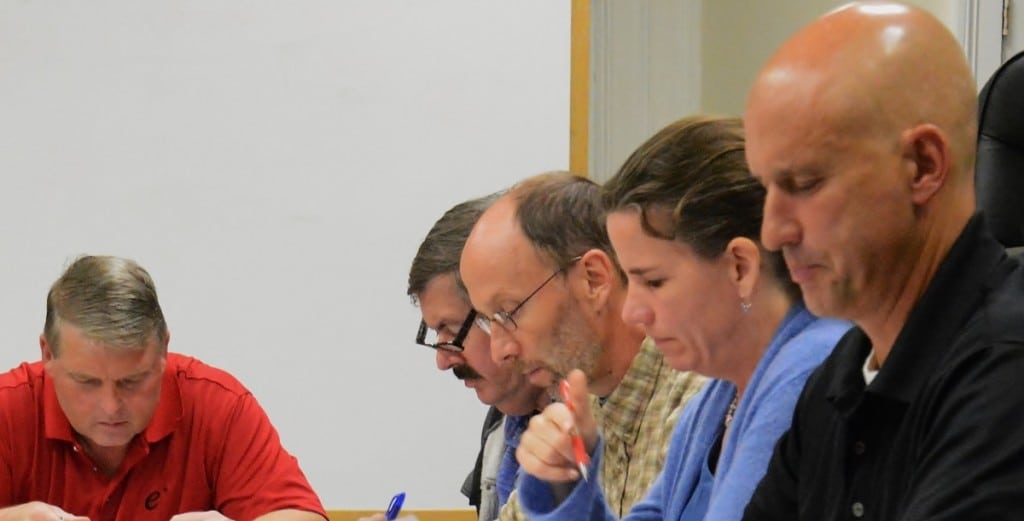 The Philipstown Town Board (File photo by L.S. Armstrong)

A month later, in an interview, Muller sounded the same alarm.

“We’ve done our part to do the damage, as well as every other municipality around the planet,” he said, and now must accept responsibility. “There’s this window, perhaps, to make changes,” before it’s too late. Internationally, “we should care because climate change will destabilize democracies around the world,” he said.

Closer to home, Muller said, Highlands residents should care because climate change will upset local agriculture; force local governments to spend money on the after-effects of violent weather, which could conceivably lead to tax increases; and generally make life difficult, especially for those who don’t have wealth to create “a cushion against chaos” because “those who live on the edge of poverty have very little backup.”

Muller said the Philipstown task force is focusing on creating an inventory of town government greenhouse gas emissions. Then comes the community inventory. Muller said the group plans to gather more data than is typical in such surveys. But that requires funding. So far, it has raised $10,000 with the help of the Ecological Citizens Project and hopes to receive a matching state grant, he said.

The precise inventory will gather such details as how many miles a vehicle is driven or the type of windows and insulation in buildings, Muller said. “The idea is to have more real data” to better measure the progress made with upgrades.

Muller said a 2010 regional study suggested that “people drive way too much in Putnam County and that deforestation is an issue. Philipstown might be a little different,” he said, because residents and the board are “already savvy about this. We’re seeking to become a Climate Smart Community, but that doesn’t mean a lot of things aren’t already happening.”

The town’s comprehensive plan calls for conserving its farmland, forests, shoreline and scenery; developing paths for bikes, hiking and horses; minimizing sprawl; tightening land-use laws; and promoting recycling and renewable energy. Five years after the plan’s adoption, the Town Board changed the zoning code to turn plan recommendations into law.

It also transformed its conservation advisory committee into a full-scale Conservation Board, which safeguards wetlands and water supplies and approves relevant development applications. More recently, the town government started looking at installing solar panels at the Recreation Center in Garrison.

Being Climate Smart “goes hand-in-hand with all these initiatives,” Shea said.

Concerns about septic overflow during floods was cited by neighbors opposed to the construction of a house on Douglas Lane, on the border of Nelsonville, earlier this year. The town Zoning Board of Appeals denied a permit for the project.

A month ago the town ordered an updated version of its 2007 ground-water study to analyze whether wells must now be dug deeper to reach fresh water; consider whether homeowners should be required to test wells periodically; identify potential contamination sources, such as old mines or industrial properties, that could leak pollutants; and survey water-quality threats along the Route 9 corridor near aquifer sites.

At recent meetings, Leonard cited the significance of the groundwater and stormwater work, noting that around shorelines and lakes, such as Cortlandt Lake and Lake Celeste, structures built years ago as seasonal cottages have become year-round, full-time homes. Residential applications of lawn chemicals could already allow additives to run into the lakes, which “are suffering for it,” he told his Town Board colleagues on May 3.

Faulty septic systems pose other problems, he said, noting that Mohegan Lake, in Westchester County, has suffered “serious problems” and that government officials there are considering a law requiring property owners to prove that their septic systems are cleaned out every three years.

What does it take?

Kingston, a riverfront community like Cold Spring and Beacon, is the Climate Smart program’s only “silver” city. It has a population of about 23,000.

The husband-and-wife team of Steve and Julie Noble championed the city’s response to climate change, even before Climate Smart, while working for the parks and recreation department. Julie was appointed Climate Smart coordinator and, in 2016, Steve was elected mayor.

“Kingston has always leaned toward being a green, sustainable city,” the mayor said. “We recognized it’s a way for us to save money, which taxpayers love.” 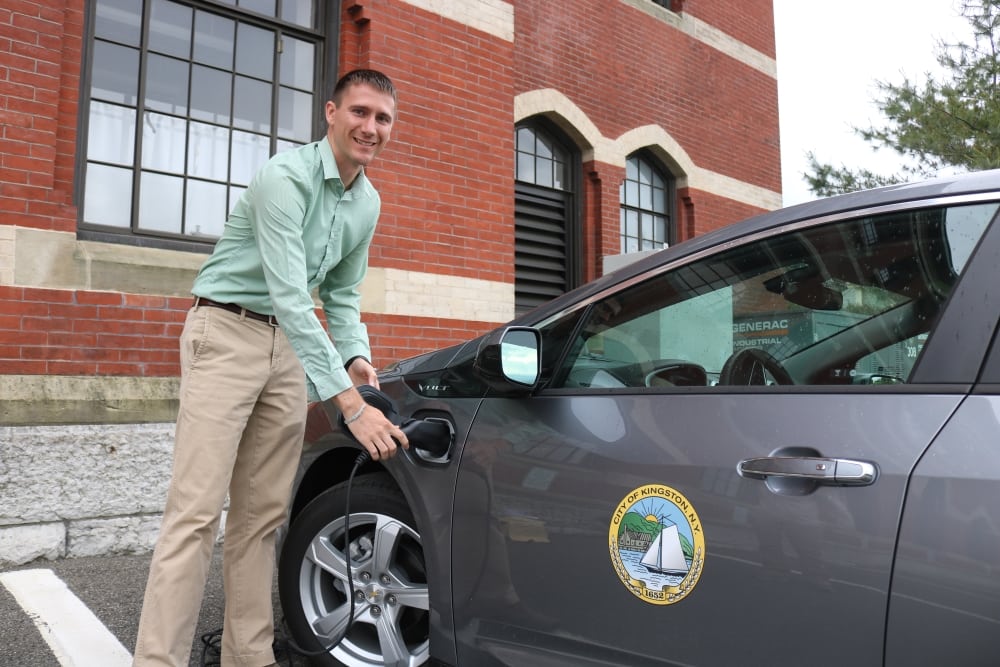 Mayor Steve Noble plugs in one of the City of Kingston’s four hybrids. (Photo by Michael Turton)

Some of Kingston’s projects include a city fleet with four hybrid and three electric cars; LED lighting on all city streets; a mile of central roadway revamped to include a protected bicycle lane; rain garden tree pits and pervious pavers to reduce stormwater runoff, paid for with a $750,000 Climate Smart grant; the replacement of 100 single-pane windows at City Hall, paid for with a $100,000 state grant; providing residents with composters, recycling bins and rain barrels; and figuring out how to make the city fully accessible by bike or foot.

Steve Noble says the city has used a soft touch with residents. “We’ve never taken the approach that it’s the law and you must do that,” he said of mitigation and adaptation efforts. Instead, he said, the city leads by example, by composting and recycling, using fuel-efficient vehicles and switching to LED lighting.

Noble said one major benefit of achieving silver status has been increased access to funding, including grants through Climate Smart Communities and the Clean Energy Communities program run by the New York State Energy Research and Development Authority (NYSERDA).

“We have done a lot of long-term planning,” he said. “We’ve taken a look at our waterfronts because sea-level rise is already happening.” At high tide, “our waterfronts are flooding more now than they used to.” The city has also revisited its comprehensive plan to ensure that it looks far enough into the future.

He says Kingston officials are asking tough questions about the effect of rising water levels on infrastructure: should sidewalks and roads be raised; should certain areas be abandoned and returned to nature? “The community recognizes that our waterfront is such a special place,” Noble said. “To lose it would be terrible.” 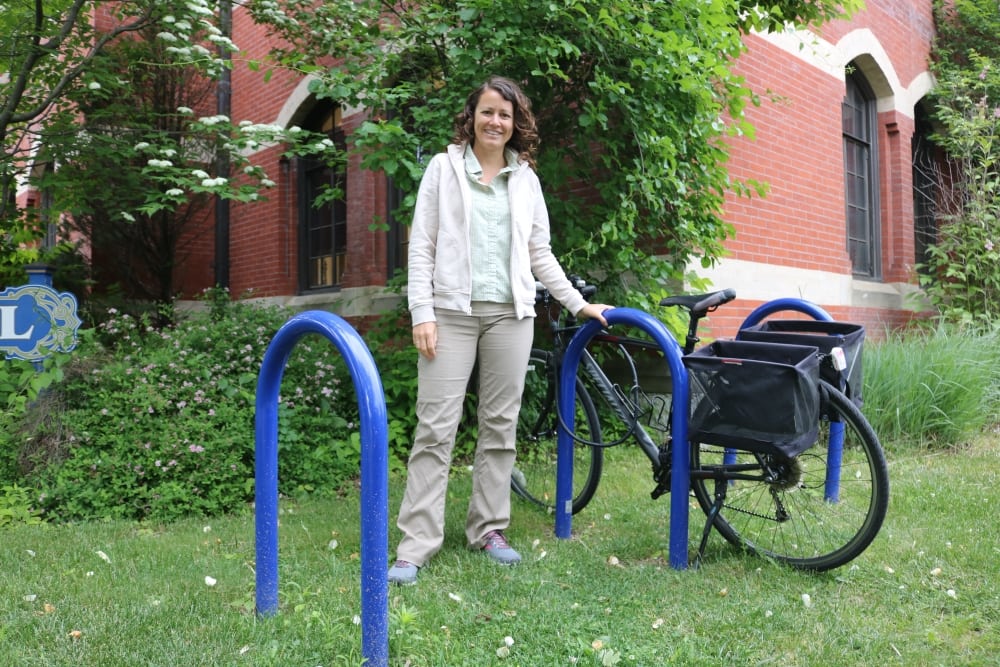 Julie Noble, the city’s environmental education and sustainability coordinator, also chairs the Climate Smart Kingston Commission, which implements the city’s 2012 Climate Action Plan. The 21-member panel consists of staff from departments  such as planning, public works and economic development, as well as community stakeholders and professionals from fields that include renewable energy, education and shoreline management.

Its work provides “the match” often required for grant funding, she said. The commission handles some projects; city departments tend to others.

“We’ve tried to change the mindset regarding how people can collectively move Kingston toward a more sustainable future,” Julie Noble said. That change can vary from neighborhood to neighborhood. “In some areas it might be about recycling or better composting,” she said. “In other areas it might be about green infrastructure, electric vehicles, altering buildings or bicycle infrastructure.”

Noble said she regularly gets calls from officials in other municipalities asking about Kingston’s success. “The most important thing any community can do is to hire someone to work on environmental issues,” she said. “That’s how things get done.”

What Now?
The Bottom Line
Can We All Get Along?
Hot Earth, or Hot Air?