The long-awaited opening of Dolly’s, a cafe and restaurant on Garrison’s Landing where the iconic Guinan’s Pub and Country Store once stood, is nearly here.

Shelley Boris and Kimball Gell, co-owners of Fresh Company, a Philipstown-based catering firm, say they have a few bells and whistles to hang — molding, mirrors, shelving, artwork — before a soft opening in the next few weeks with breakfast and lunch service. Dinner service will follow. 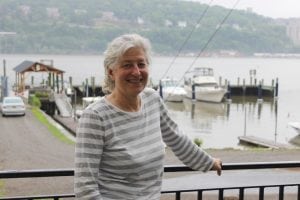 Shelley Boris on a patio at Dolly’s (Photo by A. Rooney)

The name, Dolly’s, is a nod to the film Hello, Dolly!, which was filmed in part on Garrison’s Landing in 1968, the anniversary of which is being celebrated this summer with a festival.

“Dolly’s feels like there’s a sense of fun, that it’s all not too serious,” Boris says, adding that, for her, it also evokes “Guys and Dolls, Dolly Parton, kids playing with dolls, all those things. It feels like it can be a lot of different things to people, and that’s what we want it to be like.”

A tour of the newly renovated, three-story space overlooking the Hudson began with the large front room with windows open to the river. The back room — the former pub — is dominated by the familiar stone fireplace. There are two outdoor patios, one near the river and the other over the front entrance, and a room downstairs that can be used for private events. 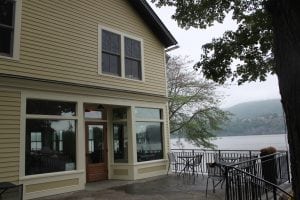 The front of Dolly’s, with the clapboard that was the original exterior of the building (Photo by A. Rooney)

Boris and Gell, who founded Fresh Company in 2004, are leasing the space from Garrison Station Plaza, which owns and operates the Landing in partnership with the nonprofit Garrison’s Landing Association. Fresh Company provides food service at the Garrison Institute and runs the cafe and a taco truck at the Storm King Art Center in New Windsor.

Boris, who is Dolly’s executive chef (Gell is the “boots on the ground,” handling events, rentals and equipment, Boris says), has long coveted the spot. But once secured, the building took time to prepare. After the building’s 50 years as a country store, and 10 years being dormant, its plumbing, refrigeration, exhaust and water systems all needed upgrading. The wall that divided the Guinan family living room from the store has been removed and the building’s bay windows raised. The green stucco exterior was removed to reveal the original clapboard siding, which was painted yellow. The landmark phone booth remains and may be repurposed. 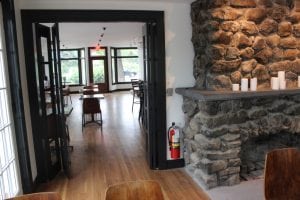 A view from the former pub toward the north entrance shows the familiar fireplace on the right. (Photo by A. Rooney)

Boris says she has long been tempted to open a restaurant but found the catering business provided a better schedule while raising her now-grown sons. Soon after Guinan’s closed in 2008, she expressed interest but was told other plans were being explored. “When it came back to me three or four years later, I was very excited,” Boris says.

Naturally, the partners plan to tap into the morning rush of commuters to the adjacent Metro-North station. Dolly’s will offer a range of coffees by Long Island City’s Regalia Roasters, espresso and loose-leaf tea, as well as breakfast food such as a sandwich made with local eggs and Marbled Meat Shop’s bacon and sausage. There will be scones, granola served with local maple syrup and even “nourishing” roasted sweet potatoes, according to Boris. 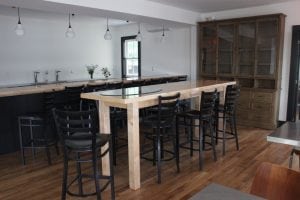 The long bar in the front room awaits the finishing touches. (Photo by A. Rooney)

At lunch, Dolly’s will offer soups, salads and sandwiches, and dinners will include Autumn Harvest grass-fed beef burgers served with “we make our own” pickles. There’ll be steak, roasted chicken and fish such as striped bass or fluke, along with vegetarian options. It will offer craft beers and ciders, spirits and wine. Take out will be available in a refrigerated case near the door, and there will be 16 parking spots. And there will be soft serve ice cream by Ronnybrook Farms.

Live music, a staple of the Guinan’s experience, will return, beginning once a month, Boris says. The pub will be remembered in a display assembled by Gwendolyn Bounds, author of a memoir of Guinan’s, Little Chapel on the River; photographer Christine Ashburn; designer Kelly Guinan Preusser and Landing resident Mary Ellen Yannitelli.

“We want to be respectful of the history, but don’t want to take advantage of it,” Boris says. Like Guinan’s, she and Gell want Dolly’s to be “open and comfortable, welcoming to people of various ages, families, in the pub tradition.”