Torres Jr. drafted by Indians in first round

Lenny Torres Jr., a senior pitcher at Beacon High School with a 98 mph fastball, was selected on Monday (June 4) in the Major League Baseball draft by the Cleveland Indians.

Torres, 17, who planned to attend St. John’s University in the fall on an athletic scholarship, said he will forgo college to sign with the Indians. 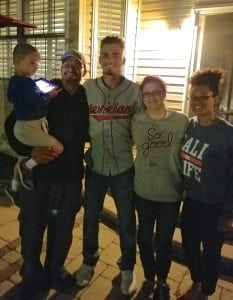 The 6’2” righthander was taken as one of eight “competitive balance” picks at the end of the first round, designed to give leverage to teams in smaller markets. In the 2017 draft, the picks signed for bonuses of $1.9 million to $2.4 million.

After Lenny graduates from high school on June 23, he will travel to Cleveland to sign, then start his career in Goodyear, Arizona, in the Rookie League.

“He still has five levels of minor league ball” to advance through before reaching the majors, noted his father. “It will get harder. But no matter what level, he always rises to the occasion. I know he just wants to keep going and make it to the show.“ 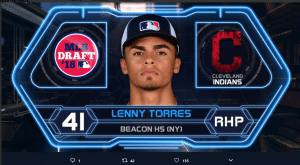 A graphic from MLB’s coverage of the draft

Rather than attend the draft in Secaucus, New Jersey, the Torres family planned a small gathering at their home in Beacon. That quickly turned into a community viewing party, with 60 to 70 people huddled around a television in the backyard.

“We had teammates, family from Florida, coaches from high school, trainers, neighbors, friends,” said Lenny Torres Sr. “It was a party!”

A standout for Beacon High School, Torres put his name more firmly on the national radar with strong showings at Perfect Game National, the Tournament of Stars and by pitching in the PG All-American Classic Game. He cemented his spot by coming out of the gate and showing similar arm strength this spring.

The right-hander will sit around 93 mph right now and can touch 96 to 97 mph, and it’s easy to dream on more velocity consistently in the future, especially given he’s just 17 years old. Torres has a slider that could be a future plus pitch, though he doesn’t always show it now, dominating his competition with his fastball. He’ll also fiddle with a changeup in the bullpen that has some arm side run, but he doesn’t use it in games.

Like with many young pitchers, he’s more control over command right now, but he tends to throw strikes. Some see a future reliever in the St. John’s commit, but the team that thinks he can start will be the one to take him in the top few rounds.

The crowd erupted when Lenny’s name was announced. “I stood up and hugged my dad,” Lenny said. “We cried a lot, tears of joy. It was nerve-wracking, but the moment I heard my name, it felt like the beginning of a lot of things. I’m not anxious or nervous, I’m ready. My dad taught me to stay quiet, be humble, and show what you can do on the field.”

His father said the evening was surreal. “All of the sacrifices, the finances, the time — to see it all come to life is amazing,” he said. “I think Beacon just became a Cleveland Indians town.”

The day after the draft, Lenny was presented with the Beacon High School baseball team’s MVP Award by Coach Bobby Atwell. “In 30 years here I’m not sure there has been an athlete who has to perform under more pressure and more eyes on him every day than this gentleman did,” he said.

2 thoughts on “Going to Cleveland”