Abbey Stowell, a senior at Haldane High School, will make her third trip to the New York State track-and-field championships today (June 8), to make a final push for a Division 2 title in the pentathlon.

Two Beacon High School athletes will also be traveling north to compete in Division 1, made up of larger schools. Ethan Burgos qualified in the boys’ 400-meter hurdles and Jummie Akinwunmi will compete in the girls’ high jump and long jump.

The pentathlon includes five events: the 800-meter run, 100-meter hurdles, high jump, long jump and shotput, over two days. Stowell had her best finish in 2016, placing fourth in Division 2 with 2,714 points. Last year she was sixth with 2,559. 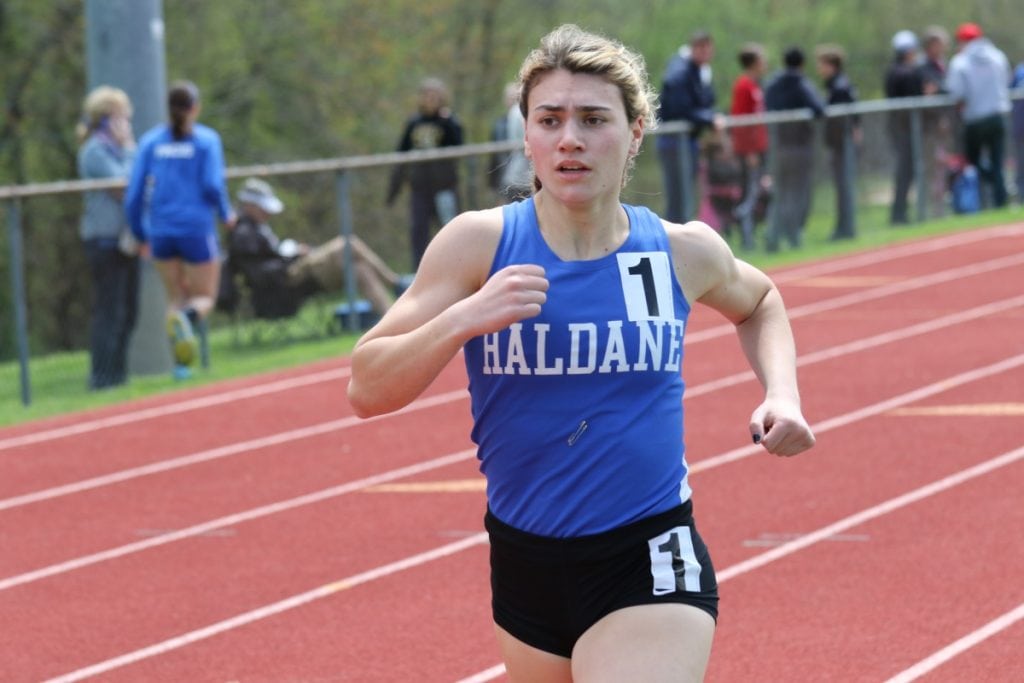 Abbey Stowell competes in the 800-meter run during a meet in May 2017. (Photo by Michael Haines)

“I’m thrilled with my season so far,” said Stowell, who won the Section 1, Division 2 qualifier in White Plains with 3,160 points, breaking her own Haldane record. She also holds school records in the 200-meter run, 100-meter hurdles, high jump and long jump.

The pentathlon is a particular challenge, he noted. “You may be good in the 800, but you might not be a jumper. She likes the challenge of figuring out how to approach the five events in training.”

Stowell began competing in the pentathlon in the eighth grade. “She was strong in a few events, and that jump-started it,” McConville recalled. Because Haldane does not have a regulation track, she trained at Putnam Valley and Beacon high schools with help from other coaches, including PJ Keating at Putnam Valley.

“Her drive, desire to push herself — sometimes too hard — her fire, the attitude to compete and not hold back, all make her who she is,” McConville said.

One thought on “Going to Syracuse”