Nancy Montgomery, a three-term member of the Philipstown Town Board, will run in November for the seat held in the Putnam County Legislature by Barbara Scuccimarra. The district includes Philipstown and part of Putnam Valley.

Montgomery, a Democrat, has been on the Town Board since 2008. On Wednesday (June 6), Philipstown Democrats announced a campaign event scheduled for June 15 in Garrison with Montgomery and Kent Supervisor Maureen Fleming, who is challenging incumbent MaryEllen Odell for county executive. 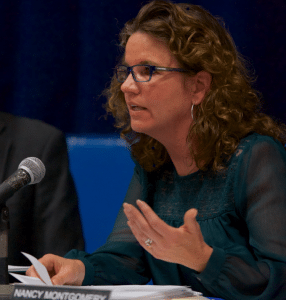 Odell is a Republican, as are Scuccimarra and the other eight members of the county Legislature.

Asked why she is running, Montgomery said in a statement: “What I know now, from my years of dedication to Philipstown, is that the more we do in local government, the less they do on the county level to give back to our towns. Our towns cannot continue to progress without the resources and policy’s that we should be getting from our Putnam County government. It’s time for me to sit at the table with the county and get what we need.

“I know our community needs help in keeping what we have and getting the services that we need and I have the skills to fill that need,” she wrote.

Scuccimarra announced on May 8 that she would run for a third term. She may face a primary challenge from Patty Villanova of Putnam Valley, who said on May 7 that she planned to run. She said of Montgomery’s announcement: “I’ve heard rumors for a while that she planned to run, and now it’s official. I look forward to comparing our records of public service and letting voters make the right choice.”

Scuccimarra is a former member of the Philipstown Town Board. She lost her position in 2011 to Montgomery and Dave Merandy, now the mayor of Cold Spring, in a four-way race for two seats. The next year, Scuccimarra ran for the county Legislature, defeating Steve Rosario with 54 percent of the vote, and then won re-election against Lithgow Osborne in 2015 with 58 percent.

Montgomery was endorsed June 4 by the Putnam County Democratic Committee, along with Fleming, incumbent state Assemblywoman Sandy Galef and Karen Smythe, who is challenging state Sen. Sue Serino. The Putnam County Republican Committee endorsed Odell and Scuccimarra on May 17.

Meanwhile, U.S. Rep. Sean Patrick Maloney, whose district includes the Highlands, announced on Wednesday that he will pursue the Democratic nomination for state attorney general. Three other candidates have already announced.

The position is open after the resignation on May 7 of Eric Schneiderman following allegations he physically assaulted four women.

Maloney, 51, says he will continue to pursue re-election to his fourth term representing New York’s District 18 in Congress. The Democratic primary for his House seat is June 26, while the primary for the attorney general position takes place Sept. 13. Maloney says if he wins the state primary, he will abandon his House re-election bid.

“When you’ve got crooks in the White House, crooks in Albany and crooks in corporate suites, you need a leader with the passion to fight and the experience to win,” he said in a statement. “I’ve successfully defended the Constitution and our progressive values against the Trump administration’s attacks down in Washington, but now it’s time to go on offense.” 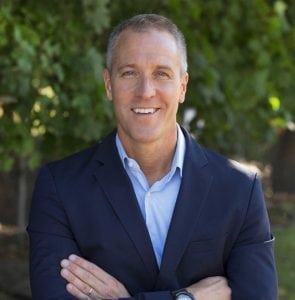 Maloney has more than $3 million in his campaign fund for Congress, but it’s not clear if he can use that money in his bid for attorney general. If he wins that primary, the 18th House District would likely become a battleground. It is just one of 18 districts in the country held by a Democratic House member but won by President Trump in 2016. Maloney took the seat in 2012 by defeating the Republican incumbent, Nan Hayworth.

Other Democratic candidates for the attorney general job are Letitia James, a New York City public advocate who won 85 percent of the delegates at the state party convention and is backed by Gov. Andrew Cuomo; Zephyr Teachout, a law professor who won 34 percent of the vote in the 2014 Democratic primary for governor; and Leecia Eve, a former adviser to Hillary Clinton and Cuomo.

James has secured a spot on the primary ballot because of the state party endorsement; Maloney, Teachout and Eve each need to gather 15,000 signatures between July 10 and Aug. 21. The Republican-endorsed candidate is Keith Wofford, a partner in the firm Ropes & Gray.

Before he began his political career, Maloney received his law degree from the University of Virginia and was a partner at two law firms. He served as a senior adviser to President Bill Clinton and has worked for two New York governors.

Maloney was among 16 candidates who applied to the state Legislature to fill the remainder of Schneiderman’s term. But he soon withdrew his name, saying he felt acting Attorney General Barbara Underwood, who is not running to keep the position, was the best choice. The Legislature appointed her to fill the job until Dec. 31.

Maloney ran for attorney general in 2006 but was third in the Democratic primary behind Mark Green and Cuomo, who won the general election.