But disappointment for Beacon jumper

Abbey Stowell, the Haldane senior who has made three trips to the state championships to compete for the pentathlon title, finished third among small-school competitors in her final meet on Saturday (June 9). 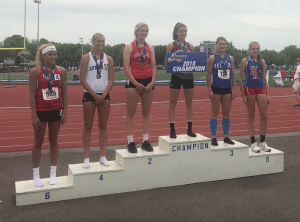 Abbey Stowell, second from right, on the podium 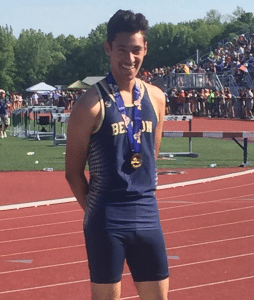 Ethan Burgos of Beacon High School also finished with a medal, running seventh among Division 1 schools in the 400-meter hurdles in 55.52. He qualified for the state meet with a personal best 55.03. The state champ was Ryler Gould of Newburgh Free Academy, in 53.04.

Jummie Akinwunmi, the standout Beacon jumper (and class valedictorian), was presented with the Section 1 Sportsmanship Award but otherwise had a disappointing weekend.

On a gusty Friday, the senior faulted four times in the long jump, after achieving 17-11 in her final leap of the sectional qualifier. (The state champ among Division 1 schools was Nadia Saunders of North Rockland, who jumped 19-2.25.)

The next day Akinwumni and three other competitors in the high jump failed to clear 5 feet in three attempts to advance past the initial round. Akinwumni had cleared 5-1 to win the Section 1 qualifier; the state champion would clear 5-6.

One thought on “Haldane’s Stowell Third in Pentathlon”