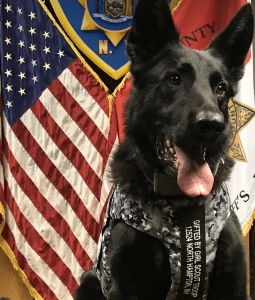 Vested Interest in K9s, a nonprofit based in Massachusetts, donated a bullet- and stab-proof protective vest to Lex, a K-9 officer with the Putnam County Sheriff’s Department.

Since 2009, Vested Interest has provided more than 2,700 vests to police dogs. The vest for Lex was sponsored by a Girl Scout troop in New Hampshire.