In a wide-ranging conversation for her public-access television program, Sandy Galef, who represents the Highlands in the state Assembly, on May 4 spoke with newly elected Putnam County Sheriff Robert Langley Jr. and newly appointed Peekskill Police Chief Don Halmy. The 30-minute exchange can be viewed at the bottom of the page or at 8:30 p.m. on June 15, 22 and 29 on Cablevision Channel 21. The excerpts below, prepared by The Current, have been edited for clarity and brevity. 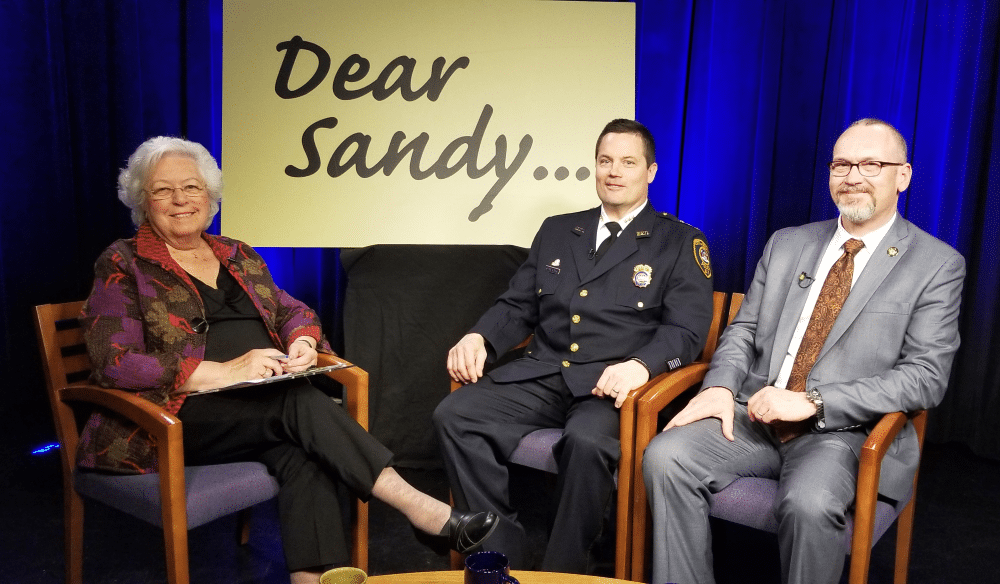 Galef: You have both been in the policing business for a long time. How has it changed over the years?

Langley: The foundation of law enforcement has remained the same, and that’s community policing. You need that connection to not only get information out there but to get information back to keep your community safe. Technology, however, progresses so rapidly. We try to keep pace but it moves faster than our budgets do.

Galef: Don, what changes have you seen?

Halmy: There’s a fear of technology among a lot of police officers, but you have to embrace the change. Our officers now have body cameras. Many officers were vehemently against it. They didn’t like having to feel that Big Brother was watching. But in almost every, if not every, case where we’ve had to review body-camera footage because of a complaint, it’s vindicated the police officer. The young officers that come out, they don’t think twice about it.

The other big thing with technology is that, when I started 20 years ago, if something was happening and you needed a photo, you had to run into your house and grab your Instamatic from a shelf. Today everyone carries a camera. And everyone has access to social media, where things are posted immediately. If you’re doing the right thing, you have nothing to be concerned about.

Langley: We don’t. But we have dash cameras in all our [squad] cars and, much as in Peekskill, they exonerate the officers from false accusations. Cameras truly are the friends of police officers. Every single time, I can honestly say, the officer has been conducting himself properly, professionally and courteously, and it’s the person who made the complaint who was very aggressive.

Halmy: The day will come when everyone will have them. It is expensive. It’s a budget commitment, but once you start it, there’s no turning back.

Galef: Robert, are there new areas you are covering in Putnam County?

Langley: There are bike trails through the county that you can take from Connecticut to Westchester. Much of that area gets pretty desolate. So, much like Peekskill, we have bicycle patrols on the trails. Sometimes we will come across a small homeless community that has found these desolate areas and set up camp, so we want to ensure those areas are kept clear and also assist the homeless in finding adequate shelter.

Galef: How engaged do you get with the mental-health issues?

Langley: If someone poses a risk to their own safety or public safety, they are transported to a facility and either committed or released. It’s up to the medical professionals to make that determination. But if they come to our jail, they get the treatment they need, they get the medication, but now the problem arises with the transition when they are released. It’s quite frightening for them. They’ve been in a situation that’s quite comfortable, and they have a relationship with a counselor and now you’re putting them out on the street. They usually, repeat offend and wind up back in our custody. We’re starting to implement a release program with [the nonprofit counseling center] CoveCare so they continue their care. The big problem is the aid for mental-health transition all goes to state prisons. All county jails have to bear the expense.

Halmy: The unfortunate thing is that there a lot of people who need full-time treatment. They don’t need a half-day interview and a lunch and an opportunity to take a shower and change clothes. That is a budget concern in every field in the public sector.

Galef: We could always do more, if we had the money. As police officers, you’re also social workers, mental-health providers, health care …

Galef: Have you seen more domestic violence over the past 20 years?

Langley: I think it’s more only because it’s being recognized. The wake-up call was an incident in Torrington, Connecticut [in 1983, when police ignored a woman’s calls when her husband repeatedly violated a restraining order. They arrived 25 minutes after one call to find her with 13 stab wounds]. The zero tolerance [aspect] came in with O.J. Simpson.

Galef: After the O.J. Simpson case, all these domestic-violence bills that were going nowhere in Albany suddenly popped up again and were implemented. For a while it was hard, because how can police go into a home and determine how people are relating to one another?

Langley: The state Legislature has helped by giving us more authority to remove someone from a home. If there are children in the home, that escalates to a whole other category. Without that legislation, we don’t have as much power to de-escalate those situations.

Galef: How about the epidemic of opioid abuse? How do you handle that?

Halmy: Our officers all carry [the opiate antidote] Narcan, and I have administered it myself. One of the most important things for police officers is to try not to dehumanize people who are addicted. They come from all walks of life. Someone may have become addicted after a back injury, or a car accident, or the obvious way of just hooking up with the wrong person. When people are deeply into addiction, they tend to become involved in thefts and problems in their homes, because they are difficult for parents and grandparents to deal with. I have felt the crisis; my sister’s son passed away two years ago from an overdose.

Langley: It is everywhere. It doesn’t discriminate.