The long wait is over. Cold Spring’s new post office opened its doors at 8:30 a.m. on Monday (June 18). The 1,330-square-foot facility is located at the south end of the Lahey Pavilion on Route 9D in space leased from Butterfield Realty Inc. as part of the redevelopment of the former hospital site. 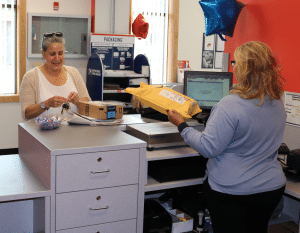 Allison Shea was the first customer at Cold Spring’s new post office when it opened at 8:30 a.m. on June 18. She is assisted by clerk Nydia Pachanco. (Photo by M. Turton)

The retail counter and post-office boxes had been in a trailer adjacent to Foodtown since 2014, when the post office lease in the building ended and the supermarket expanded. The sorting operation was moved at the time to the Garrison post office and will remain there, despite protests by neighbors.

The new Cold Spring location “provides a great place for our customers to do business and a positive work environment for the three employees,” said George Flood, a spokesman for the U.S. Postal Service. He said the new space includes 368 boxes and 14 parcel lockers, all with 24-hour access. A grand opening is schedule for 11 a.m. on Wednesday, June 27.

An early history of the Cold Spring post office

1820 – By some accounts, the post office around this time was located at a stagecoach stop inside what is now a private home at 43 Main St.

1828 – The New York American lamented that “much delay, and not unfrequently serious inconvenience” arises with the mail from towns having similar names such as Cold Spring, Cold Spring Harbor on Long Island and West Cold Spring in Cattaraugus County (now Coldspring). 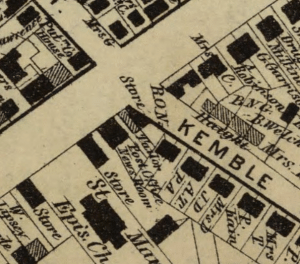 1867 – The post office had moved to the building on Main Street now occupied by Archipelago and the Country Goose.

1897 – The Cold Spring Recorder noted that the change in the Central-Hudson railroad timetable “has necessarily caused a change in the arrival and departure of mails.”

1905 – Using a drill and two charges of nitroglycerine, five masked men blew up the 1,500-pound safe inside the post office, located in the VanDoren building on Main Street (now Antique Alley), at about 2 a.m. on a Thursday. The gang made off with $350 in stamps, $40 in cash and 40 blank money orders. The only witness was Jim Lee, who operated a nearby laundry, but he reportedly ran back into his store in fear. Neighbors who heard the explosion said they didn’t realize it was so close.

1937 – A new post office opened in the Edward L. Post Sr. building at the corner of Main and Stone streets (now the Houlihan Lawrence offices).

Cold Spring also has a new postmaster, Karen Zappala. She succeeds Walter Klietz, who had taken the position in December.

USPS officials declined to say how much they are paying to lease the facility. A call to Unicorn Contracting, the construction arm of Butterfield Realty whose office is adjacent to the new post office, was not returned by press time. 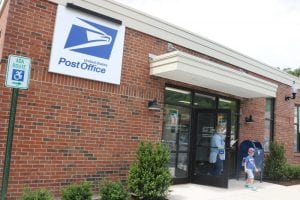 After the sorting for Cold Spring addresses moved to the Garrison facility in January 2014, the post office’s neighbors there quickly expressed concern about the increased delivery truck traffic, early morning noise, bright lights and overflow employee parking. At a special meeting of the Cold Spring Village Board a month later, held at the Haldane school auditorium to accommodate the crowd, USPS representatives were peppered with questions and complaints.

Residents of the Lower Hudson Valley receive an average of 337 pieces of first-class mail annually (down 9 percent from 2010) and 459 pieces of marketing (“junk”) mail (down 8 percent).

The concerns remain. Last October, more than 20 Garrison residents wrote the Philipstown Town Board, USPS officials and Putnam County Legislator Barbara Scuccimarra to complain that “the continuing nuisance of nighttime deliveries has now gone from bad to worse.” The residents said that Amazon trucks arrive as early as 3:30 a.m., even before sorting operations begin at 5 a.m. 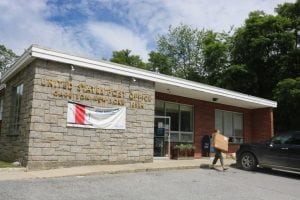 Wally Schaefer, who lives on Grassy Lane behind the post office, wrote in an email to The Current that “our primary concern is to have the distribution operations, and their associated noise and lighting annoyances, moved to a more appropriate area and facility. We appreciate having the retail operations here, but this is essentially a residential neighborhood, and we would like to sleep at night.”

The neighbors argued in October that the increased activity in Garrison “clearly violates our town zoning laws,” but, as a federal agency, USPS is not subject to local zoning.

Flood declined to comment on the complaints, saying only that “we strive to be a good neighbor and remain open to suggestions from the community to improve the way we do business.”