Former landfill will save city $100,000 annually

A solar power farm at the former Beacon landfill near Dennings Point should be operational next month, saving the city as much as $100,000 annually in electricity costs.

The 20-acre site, used first illegally and then as a municipal dump before the state Department of Environmental Conservation closed it in 1977, is now home to 8,500 solar panels stationed on steel girders and tilted 25 degrees toward the south, where they’ll get the most sun throughout the year. It is expected to produce 2 megawatts of energy annually, the equivalent of what is used by about 1,600 homes.

“This is no different than what you might install on your home — there’s just a lot more of it,” said Paul Curran, the managing director of BQ Energy, a Wappingers Falls firm selected by the city in 2016 to build and operate the array. “It’s a good use of this land, to generate renewable energy for city use. There’s really no downside.”

An aerial view of the solar farm at the former Beacon landfill, which should be up and running next month (BQ Energy)

The power produced by the panels will be routed through some 80 inverters to Central Hudson. BQ Energy, which has a 25-year lease on the site, will then sell the credits earned from the utility to the city at a discount.

“In simple terms, we’ll generate a negative power bill at the landfill,” explained Curran. “The credits can be used by the city to offset other power bills, such as for street lights.”

That could be a big savings. Lighting is often the largest portion of a city’s electricity costs, and according to the state Public Service Commission, Beacon’s 1,500 streetlights account for about 40 percent of its annual electricity bill.

“Where that will translate to residents will be in their taxes,” said City Administrator Anthony Ruggiero. “Residents won’t see it on their utility bills, but the savings will be in our energy costs, and we can pass that on.” 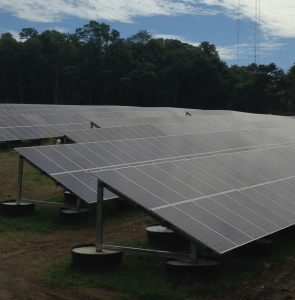 The Beacon panels are set at a 25-degree angle to maximize their year-round exposure to the sun. (Photo by J. Simms)

After BQ Energy was awarded the project, called Sunlight Beacon, it took the company about a year to construct the facility. It took another year for the state Public Service Commission, which regulates utilities, to approve the request by the company and Beacon to use the credits toward the cost of streetlights.

The project is the first of its kind in Dutchess County. In 2014, BQ Energy, which has constructed similar facilities throughout the Northeast and as far away as the Netherlands, built a solar farm at a former landfill in Patterson. Its credits are sold to the private Trinity-Pawling School.

Curran says former landfills are ideal for solar farms because they are difficult to adapt to other uses. At the Beacon site, dozens of pipes still protrude from the ground in and around the solar array to release methane created by rotting garbage below the surface.

“It’s not exactly a tourist area,” he quipped.