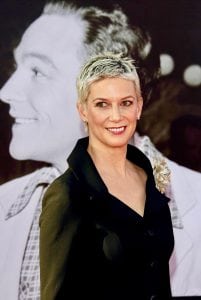 Film historian Patricia Ward Kelly is the widow of the dancer and actor Gene Kelly, who directed Hello, Dolly! (1969), including scenes filmed in Philipstown 50 years ago this summer. They were married in 1990, six years before his death.

Did Gene share any memories with you from the filming?

He was brought in late in the process. It rained for the whole time they were there [in Philipstown] and it was all shot out of order to avoid the rain. It was miserable and oppressive and there was lots of overtime. But Gene spoke about how spectacular the setting was, especially the overhead view from the chapel at West Point. He always wanted to direct The Matchmaker, the intimate Thornton Wilder play that Dolly is based on. Instead, he was handed a 70-millimeter extravaganza.

When you talk about Gene, what surprises people the most?

His mind. He spoke multiple languages, wrote poetry, read Latin and studied all forms of dance.

You’ve said the Depression was at the root of his style. How so?

Gene was studying economics, intending to become a lawyer, when he watched his father, his idol, get destroyed by the Depression. It made Gene champion the common man. He would say, “I don’t want to dance like rich people.” He combined that with his background in sports — ice hockey and baseball, mainly — developing movements. He rejected the European-like tails and instead wore clothing that didn’t obscure the movement lines.

He grew up in Pittsburgh. How did he end up in New York City?

He ran a dance studio in Pittsburgh. He went to New York intending to be a choreographer, but he got laughed at and returned home. When he went back, it was to choreograph and dance on Broadway. The producer David O. Selznick saw him and brought him to Hollywood.

How would Gene react to the dancing on film today?

He was always looking for new things, through young people. He would say, “If I were younger, that’s what I would be doing.” He knew what had come before him, from vaudeville and from black performers; he took movements he recalled from their work and incorporated them. He knew Michael Jackson borrowed from him. It was a long chain. What would trouble him is how dance is being shot. His focus was on changing the look of dance on film. He’d be upset over the amount of cutting away to close-ups of body parts. He’d say you have to stay full-figure. The assumption is that everything should be hyperkinetic. Yet when I show clips of his dances to children, they’re glued to the screen. They love that there are no cuts.