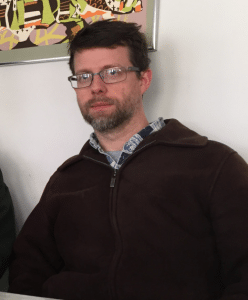 A former punk rock drummer, Mike Faloon is the author of The Other Night at Quinn’s: New Adventures in the Sonic Underground, which chronicles his experiences at the Beacon diner’s Monday night jazz series.

How did you find out about Quinn’s?

I had fallen under the spell of Joe McPhee’s record, Nation Time, and was poking around on the internet to see where he was playing. I thought it couldn’t be possible that this legendary jazz musician was playing at a diner. But when I walked in, he was sitting at the end of the bar. I learned the show was part of a series which, in my experience, can be fleeting. So I knew I had to come as many times as I could.

Did the intimate atmosphere give you a sense of what it might have been like at The Five Spot in the 1950s or CBGBs in the 1970s?

I’m more familiar with the world of punk rock, but it had a vibe that made me think of what it might have been like in late-1970s L.A. or New York. Joe McPhee called Quinn’s “The Five Spot on the Hudson,” which is a great nickname.

Is there any connection between punk and free jazz?

Both are equidistant from cultural mainstream. The age range of jazz musicians skews older and people tend to stick around longer, but in their dispositions and personalities there’s a lot of overlap in terms of people willing to book their own shows, put out their own records and do things on a smaller scale, like performing at a diner. When I played in a punk band, we booked shows at bowling alleys, pizza places — any place that had electricity that wouldn’t give us the boot after 15 minutes. Orson Welles said, “The absence of boundaries is the enemy of art.” The more boundaries there are, the more it builds people’s resolve, and the people who stick with it get more resourceful.

Did you construct the book, which is not always linear, to resemble jazz?

The first pieces are more straightforward and chronological, but as I found that my mind would drift so that about 50 percent of my notes each night were about other themes. The shows got me thinking about how I react to things in different ways.

Is Quinn’s pointing the way to an era where more influential cultural centers pop up outside major cities?

I hope so. Living up here, I can’t go to a Tuesday night show in Brooklyn. The musicians would like to have more outlets, and it’s easier to talk someone into coming out for a show if it’s down the block or a 20-minute drive instead of committing your whole night to the trip.