Four years into its scrutiny of the proposed Hudson Highlands Reserve, the Philipstown Planning Board last week sought more feedback on the upscale housing and equestrian project.

The resulting testimony at a June 21 public hearing in Cold Spring included support for a subdivision on the site, just not as currently configured.

Designed by Horton Road LLC, led by architect Ulises Liceaga, the 210-acre reserve would contain 25 weekend homes, each about 2,500 square feet on a 1-acre lot; a stable for 40 horses, indoor and outdoor arenas, paddock; and clubhouse. The parcel includes a section of Clove Creek and Ulmar Pond, a small lake. 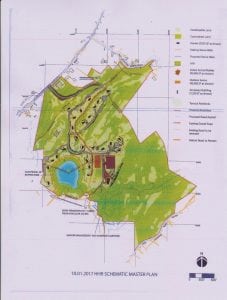 On June 5, the Planning Board unanimously declared the project must undergo a full environmental review.

“We agree this is a good site for a conservation subdivision,” Michelle Smith, executive director of the Hudson Highlands Land Trust said June 21. But instead of the current design, she recommended an alternative that clears the pond perimeter of houses, groups them to the north and reduces the size of the lots and the equestrian facility.

“That seems like a big disparity,” said Richard Butensky, who lives on East Mountain Road South.

John Clark, a neighbor, said he welcomes the equestrian center because his daughter rides but that he worries about building around the pond. “A lot of issues would be addressed if everything were moved off the pond,” he said.

Garrison resident Betsy Calhoun referred to the property as “primeval” in part but “very special” overall. Development “would totally destroy it,” she cautioned.

Liceaga, who owns a house in Philipstown, said he “has done everything by the book. I love this area.” He said the questions posed over the years have been good but that “the scope of this project has been misrepresented” by some opponents whom he suspects of using his property for personal recreation.