As he would have liked it, Tony Burton, who passed away on May 24, will be celebrated for and with his words at a gathering held at Cold Spring’s newest bookstore, Split Rock Books, beginning at 7 p.m. on Saturday, July 14. Leonora Burton, Tony’s widow, who runs The Country Goose, says she hopes to see their Philipstown-and-beyond friends at the party. “He would have loved this,” she says. 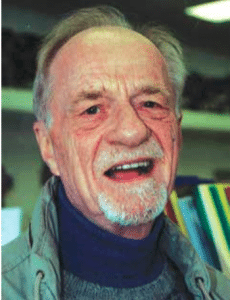 There’ll be copies of Burton’s final (and favorite) book on hand, and, ideally, an impromptu reading or two from it. Who can resist elaborating on this back-of-the-book preview:

“Jackie True revolves around an alluring refugee from Hollywood who starts off running for a seat on a village school board in [ahem] Connecticut and ends up beguiling the nation and the president. Also in the cast are political operatives, a religion-driven drunk cop, a Mafia boss, squabbling federal agents and a wretched Washington reporter, the Weasel, whose work tools include lies, deception, crudeness and attempted but usually unsuccessful seductions.”

The Burton’s beloved dog and Country Goose mascot, Tara, will also have her voice heard at the gathering, in the form of a read-aloud of one of her “Sitting on the Bench” columns, apparently — it can now be revealed — ghostwritten by Tony, and always garnering multiple chuckles.

Burton knew of what he wrote.  As noted in his obituary, he was born in 1929 in Birmingham, England, and upon leaving school became an apprentice reporter for a local newspaper there before landing a job at the London Daily Mirror. By the late 1950s he was a Big Apple transplant, working for the New York Daily News covering stories as disparate as the arrival of the Beatles in America to the Attica prison uprising. In 1983, seeking a small-town environment, the Burtons moved to Philipstown.

Tony Burton wrote four novels, and, though quite ill, was really hoping to have Jackie True published. “The hospice told me that sometimes people don’t want to let go of life because they want to have something they really wish for, happen,” Leonora says. “He wrote it 11 months ago.” 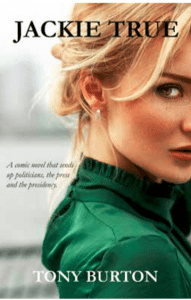 Knowing how much Tony wanted to see it in print, Leonora brought it to Kelly Preusser at Grey Printing, asking her to put it together. As she recalls: “Kelly did it right away and I showed Tony the proof, which made him really happy, except he demanded I change the photo! I asked Kelly to print 12 copies for the family. Then I posted on Facebook about how quickly Kelly was able to do this, and suddenly I got 50 orders for it, from local people and as far away as Australia. I told Kelly to make it 100 copies!

“People at the nursing home helped him ‘sign’ copies, and the biggest thing is that he got to hold a copy of his book.”