In The Current’s June 29 issue, Michael Turton reported on an ailing racing pigeon discovered by Amber Aponte-Kocela of Philipstown, who, with assistance from pigeon fancier Daniel Morales, nursed it back to health. On Saturday (July 7), they released the bird, whom Aponte-Kocela named Chester, on the baseball field at Mayor’s Park in Cold Spring. 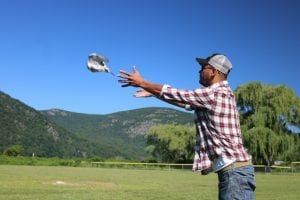 Chester flew to a net on the pitcher’s mound to get his bearings before taking off to return to his roost. Although a tag on his leg indicated the pigeon originated in Kentucky, Morales believes that because of its young age (about 4 months), home base is likely nearby. 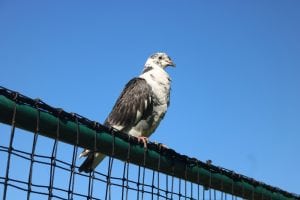 Inset: After perching, Chester surveyed the surroundings before flying off. (Photo by Michael Turton)