Helen Sung was studying at the University of Texas in Austin to be a classical pianist when, during her senior year, a friend took her to a concert by Harry Connick Jr.

“He performed with his big band,” she recalls. “But in the middle of the concert, he sat down and played some solo piano pieces. I remember wanting to jump out of my skin, this music was so alive. I remember thinking, I didn’t know you were allowed to play the piano like that!” 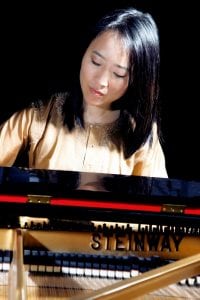 Sung, who says she was trained as a child by “a severe teacher of the Russian classical piano tradition,” immediately acted on her epiphany. She added jazz courses to her studies and immersed herself in recordings and books.

She was so inspired she decided to pursue a master’s degree in classical piano performance in part to continue her nascent study of jazz. From there, she became a member of the inaugural seven-member class of the Thelonious Monk Institute of Jazz Performance at the New England Conservatory.

Sung, who has since recorded six albums and travels around the world to perform, is scheduled to play at 4 p.m. on Sunday, July 15, at the Chapel Restoration in Cold Spring. The program will reflect her journey from classical to jazz, with original works as well as compositions by jazz icons such as Thelonious Monk and Chick Corea.

During her two years at the Monk Institute, she was taught by contemporary jazz masters and toured India and Thailand with Herbie Hancock and Wayne Shorter. In 2007 she won the Kennedy Center’s Mary Lou Williams Jazz Piano Competition.

Another career highlight, she says, was playing in a festival with the Mingus Dynasty Band in 2011 in the city where her parents grew up in Taiwan.

“There were more than 2,000 people there, all going crazy for jazz,” she says.

Sung teaches at Juilliard and Columbia and also composes music. With the help of a Chamber Music America/Doris Duke Foundation grant, she recorded Sung with Words, a collaboration with poet Dana Gioia. In 2016, she arranged and performed a big-band version of McCoy Tyner’s Four by Five for the Jazz at Lincoln Center Orchestra season.

The Chapel Restoration, at 45 Market St. in Cold Spring, is next to the Metro-North station, where parking is free. The concert is also free but donations are welcome.