Where there are Canada Geese there is also … well … Canada Geese droppings. It’s been an issue at Mayor’s Park in Cold Spring for decades and appears not likely to be resolved anytime soon, if ever.

While the battle against bird poop can evoke chuckles, Bruce Campbell, chair of the Recreation Commission, sees no humor in it.

“It’s not conducive to Haldane baseball or Pop Warner football when the field is covered with excrement,” he said. He’s also concerned about the village’s ability to rent the park out for events such as Octoberfest.

Geese are grazers with an affinity for well-manicured, fertilized lawns, making them a nuisance at parks and golf courses. They would dislike foot-tall grass at Mayor’s Park, but so would Haldane’s outfielders. 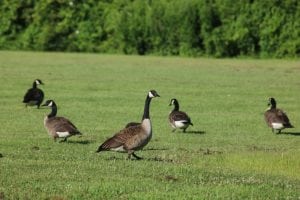 Managing the problem has been discussed numerous times by the village board, most recently at its July 10 meeting. Trustee Fran Murphy said she had researched the use of strobe lights, but a resident of Fair Street objected, expressing concern that it could adversely affect his son, who suffers from epilepsy. Visual stimuli, including strobe lights that flash in regular patterns, can trigger seizures.

A group from the Butterfield Library’s teen summer program has offered to make cut-out coyotes to place around the field, but the U.S. Humane Society says “predator effigies” will not work. Nor will balloons, scarecrows, floating alligator heads, flags, dead-goose decoys or ultrasonic sound.

Campbell said that as early as 2002, the village experimented with various defenses such as cut-outs, reflectors and even firing pistol blanks, but nothing worked for long. “It was like a war zone,” he said. “It’s always going to be a problem because of the location” near the Hudson.

The Recreation Commission has recommended that the village purchase a 48-inch-wide device, at a cost of $6,400, to sweep and thatch the grass at Mayor’s Park, but the board has put the proposal on hold.

“We’re looking at all options” said Mayor Dave Merandy. “There is no silver bullet, no single solution.”

Dog walking is not allowed at Mayor’s Park, but issuing limited permits for it to discourage the geese might be a strategy, he said.

Drivers picking up commuters at the Metro-North station may soon find tickets on their windshields if they park and wait near the pedestrian tunnel at the foot of upper Main Street.

“I’m finding it increasingly problematic to turn around there,” said Trustee Lynn Miller at the July 10 meeting, adding it is often difficult to turn left onto Main from Depot Square because of the number of cars parked illegally.

“People have been doing it for years,” said Officer-in-Charge Larry Burke of the Cold Spring Police Department. “It’s a dangerous situation,” especially when there are a lot of pedestrians.

Burke said that even with No Parking, No Stopping and No Standing signs, he has resorted to placing orange cones, which soon get moved. He often advises parked drivers to circle the block, “but we can’t always be down there” when a train arrives, he said. Burke said he will instruct officers to begin strict enforcement in the no-parking zone.

Merandy supported that move but said drivers should be warned that enforcement is about to increase. “I don’t think it’s right that we just start ticketing; we haven’t done that for years,” he said.

Burke said parking could also be curtailed by creating a turning circle or a small island at the foot of upper Main Street.

Burke reported that CSPD answered 77 calls for service in July. Officers also issued 21 traffic and 82 parking tickets and made an arrest on a warrant.

Code Enforcement Officer Greg Wunner expressed concern over continued deterioration of the building at 47 Fair St., a former car dealership, including the collapse of the roof. Merandy directed Wunner to look into condemning it.