A five-mile stretch of open water between Sandy Hook in New Jersey and Breezy Point in Queens is all that separates New York Harbor and the Hudson River from the Atlantic Ocean.

Now, in response to extreme storms such as Hurricane Sandy, the U.S. Army Corp of Engineers is examining what would happen if that stretch was walled off.

A five-mile barrier that would close to prevent flooding was one of six alternatives — including doing nothing — that the agency proposed as part of its New York/New Jersey Harbor & Tributaries Focus Area Feasibility Study. Of the others, four involve floodgates and levees placed in the harbor, on the Hudson or on tributaries, while the other consists of shoreline measures that don’t block the flow of water.

The proposals were presented to the public in three meetings, one of which took place in Poughkeepsie on July 11. The Army Corp is soliciting public comment to winnow the field to two plans, which would then be studied to determine environmental impact, cost, benefits and feasibility. A final report would be scheduled for 2021 and presented to Congress the following year to request funding.

“We’re not proposing anything now,” said Bryce Wisemiller, a project manager for the Army Corp. “We’re only studying things. It’s going to take a long time. It’s a very involved process, and there’s going to be many steps through which the public and municipalities will be able to give us their comments and input.” 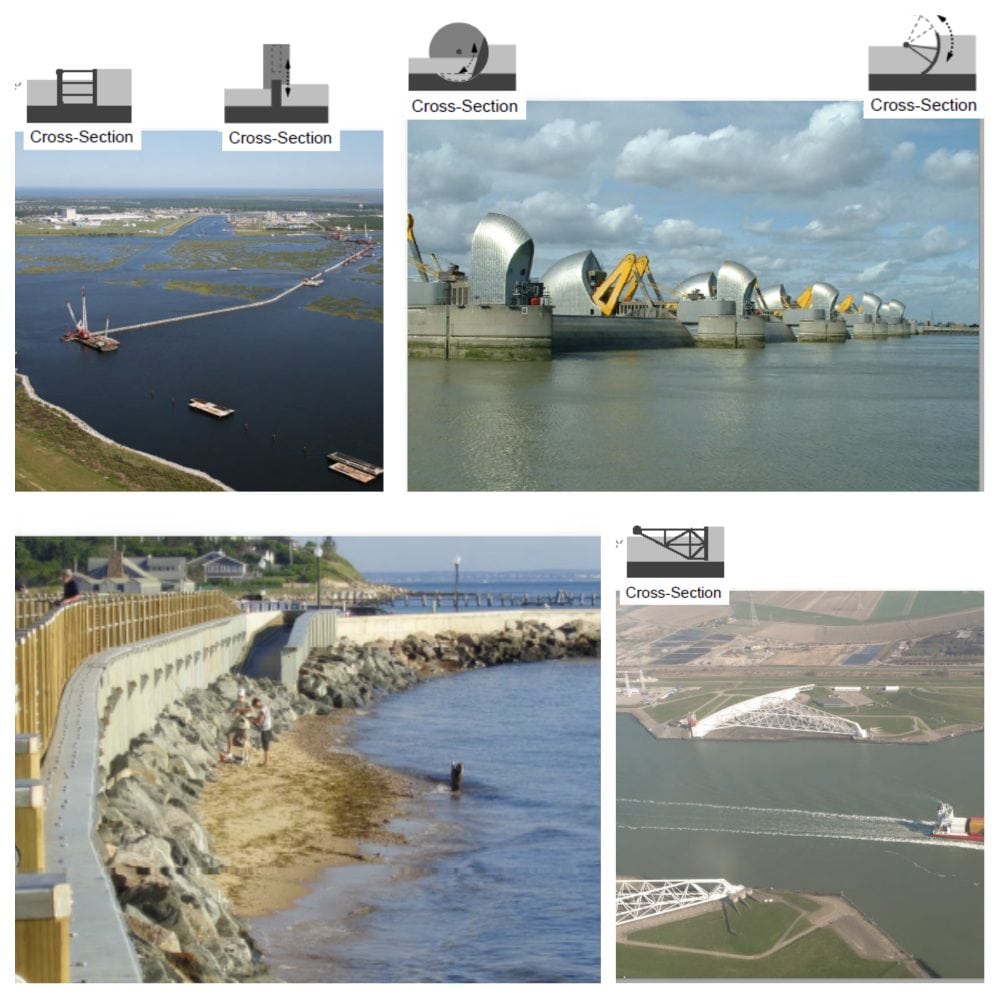 The study shared various structures designed to prevent flooding during storms, including barriers in (clockwise from top left) New Orleans, London, the Netherlands and Martha’s Vineyard.

Daria Mazey, who is the project biologist for the Army Corp, added that the initial study and hearings are “about figuring out what are the right questions we need to be asking,” and how to find the answers. “We’re looking to local communities and stakeholders as keepers of valuable local knowledge that you have because you live in this community. This is our opportunity to ask, what do we need to look at? What are we missing? What are the information sources that are out there that might help us as we move forward in our analysis?”

Nevertheless, the study has already drawn concern from environmental groups for both the impact a barrier could have on the ecological health of the Hudson River and the process by which the study is being carried out. Under guidelines established in 2014, the study must be completed in less than three years and for less than $3 million.

“That is really not appropriate for a project of this scale,” said Nava Tabak of Scenic Hudson. She said the nonprofit hopes public pressure on elected officials will give the Army Corps more time.

The timeline also allows little time before the Army Corps winnows the six proposals to two. “One of the fatal flaws in this shortened process is that you can only work with information that’s already available,” said Tabak. “This isn’t the stage at which they would design the research to answer the questions. They’re only going to do that for the one or two alternatives.”

John Lipscomb of Riverkeeper said his organization would be conducting its own studies to examine how floodgates in the Netherlands and London have affected the ecology of waterways there, although he noted it shouldn’t have to.

“The Army Corps, as the developer, should have the burden of proof,” he said. But with so much unknown about the plans, including how high such barriers would be and how often they would be closed, much less their impact, Lipscomb sees no choice. “The public still doesn’t know anything, even after the public meetings,” he said.

Tabak noted that while a barrier might prevent flooding from storm surge, in other ways it could make the situation more difficult for river towns in the face of sea-level rise due to climate change.

“There are two things that could happen,” she said. “First, lots of money gets diverted to this instead of adapting to sea-level rise, which is something we think is a good way to make communities more resilient, or, second, you have barriers but as sea-level rise progresses, there will be temptation to close them permanently to address it. That’s when would you would have extreme impacts to the ecology and communities upstream.”

The Army Corps is accepting comments through Aug. 20 by email at [email protected]

Lipscomb noted that when the U.S. Coast Guard asked for comments about a proposal to increase the number of barge anchorages on the Hudson, including one between Beacon and Newburgh, it received more than 10,000 comments, almost all against the project. “We saw what happens when an informed public has time to comment,” he said.

But he also noted that comments will be used by the Army Corps to determine its next step, so they should be constructive.

“If you write, ‘I hate this, damn you,’ it means nothing,” he said. “But if you say ‘I’m a fisherman, I love the life in this river, I want to know how these barriers would affect migrating herring and shad, and I want you to study that,’ that is an example of a comment that will have to become part of the process. If a scoping question is on the record and the Corps does not consider it, it does open up the possibility of litigation.”

One thought on “The Ocean at the Gates”