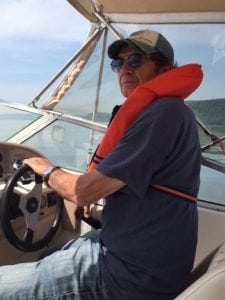 Gerald R. Hatzmann, 79, of Cortlandt Manor, died July 27, 2018, of pancreatic cancer. Following his retirement from General Electric, he operated a hot-dog truck in Cold Spring for eight years, which he called his dream job.

Born Aug. 5, 1938, in Ossining, Jerry served in the New York State Army National Guard and worked for GE for 28 years as a data communications specialist. He was a founding member of the Snow Star Ski Club, where he met his wife, Emily. They were both lifelong boaters and members of the Kings Ferry Yacht Club.

Besides his wife of 54 years, he is survived by two daughters, Christine Hatzmann and Amy Rodriguez (Joe), and his granddaughters Jessica Rodriguez and Liana Rodriguez.

Visitation will be held from 6 to 9 pm on Monday, July 30, at Nardone Funeral Home in Peekskill. A Mass of Christian Burial will be held at 10 a.m. on July 31 at St. Columbanus Church in Cortlandt Manor, with interment to follow at Assumption Cemetery.

Born Dec. 4, 1928, in Goshen, he was the son of Frederick and Ethel Mae (Lee) Treptow. Dutch served in the U.S. Navy during the Korean War.

Dutch was a life member of the Elks Lodge in Peekskill since 1958 and organized many fundraisers and dinners. He was was also a life member and captain of the Washington Engine Co. He was an avid fisherman, hunter, he enjoyed cooking for the community and spending time with his family and his beloved dogs.

He is survived by a son, Larry Treptow (JoAnn) of Peekskill and two daughters; Barbara Montero (Julio) of Montrose and Phyllis Froebrich (Fred) of Montrose, along with four grandchildren and three great-grandsons.