Cold Spring artist captures moments of her own making

Inside Amy Bennett’s Cold Spring studio there is a town, its topography shaped by nature and those who settled in it. The greens and blues of its rivers and mountains have been partially supplanted, over time, by the evidence of human habitation: first, homes and businesses, then schools, garages, churches and small bodies of water.

Bennett’s studio, though spacious, is able to hold these things because the town exists in miniature, in 1:87 scale, smaller than standard dollhouse furniture.

Bennett is a painter, often working in narrative — her works tell a story — and her three-dimensional models serve as evolving still lifes for her paintings. She taught herself to make models by taking apart and reconstructing dollhouse furniture, then experimented with model railroad kits that included “people in identifiable professions, the size of a grain of rice,” she says.

“I take materials, cut them up, glue them, then repose them,” she explains. “I fill in the blanks and I think about who lives in them.”

By moving the objects in her models around, she is able to play with position, light and ideas before committing them to oil. She paints on smooth wood panels her father makes for her because she is able to depict more detail than on canvas.

The technique has its challenges. “Something always goes wrong,” Bennett says, such as a piece of furniture coming unglued or a swimming pool that imploded when the substance that simulates water overheated in the sun. “That’s OK, though,” she says. “I’m a painter, not a photographer, so it doesn’t have to be literal.”

Bennett’s interest in storytelling developed during her childhood in Maine, where she remembers making up stories about toys. She earned her bachelor’s degree in fine arts at the University of Hartford, where she met her husband, Jonathan, a book designer. She later received a master’s in fine art from the New York Academy of Art. 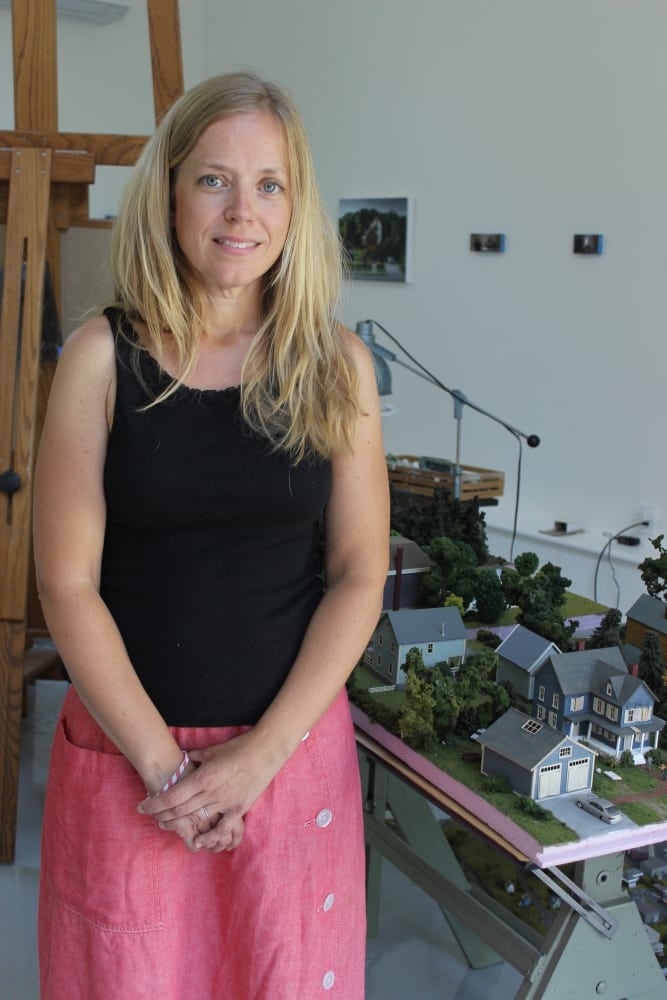 Amy Bennett with some of her models (Photo by A. Rooney)

The couple lived in Brooklyn for 15 years but the rising cost of studio space brought them to Philipstown in 2013 with their son, then 1. (Their second son, now 21 months, was born here.) “Although we’d visited Cold Spring and loved it, I thought we’d be going backward,” Bennett says. “But it turns out there was no looking back for us. Life is easier, it’s so beautiful, and there’s no shortage of incredible people and inspiration here.”

A garage on their property became her studio. “This has always been the fantasy, and the move made it possible,” she says. “I can spend an hour or two in here while my son is napping. There’s all this even light, a northward exposure, and we had great advice from our neighbor, who’s a lighting designer.”

The process of considering various towns for their new home inspired Bennett to create one of her own in a series of paintings, The Small Changes Every Day, completed in their first three years in Cold Spring. “My life and observations in Cold Spring are definitely in the work, but it’s not as interesting for me if it gets too specific,” she says. “I like the anonymity that fiction gives.”

The series began with an eight-foot square of Styrofoam on which she created a rural landscape. That slowly transformed into farmland, and a town began to develop. She fabricated more than 500 buildings, some with textures to mimic weathering. She compares it to descending in a plane, where a passenger first sees green, then roads, cars and people — “gradually things become clearer as you approach them,” she says.

Her latest series involves models of homes where “the painting itself is the room,” she says. “It is not hard to imagine they are different only in zoom — what we can see or what is revealed depends on our perspective and proximity.”

The models are not included in exhibits, unlike the paintings that she creates from them. “I’d feel more constrained if I felt I had to show the model,” Bennett explains. “The model bridges the gap between my imagination and making something I can see.”

A selection of Bennett’s new work will be shown in Vermont beginning in March at the Brattleboro Museum, and the series will be exhibited in her first solo show in New York City that opens in June at the Miles McEnery Gallery in Chelsea. She has had several solo shows at the Heller Gallery in Los Angeles and her work has been part of group shows in Tokyo and Stockholm as well as New York.

One thought on “Painting the Town”