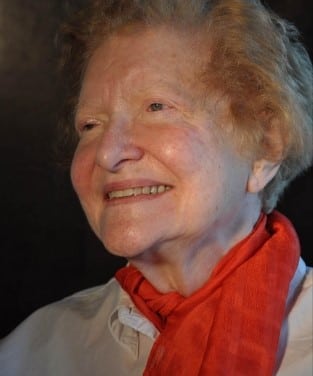 Gwendolyn Lucille Stevens, 89, died of heart failure on July 30, 2018, in Atlanta, where she was living with her daughter. She and her late husband, Bill, founded and were benefactors of the Howland Chamber Music Circle.

The Julliard String Quartet performance on Sept. 16 at the Howland Cultural Center in Beacon will be dedicated to the memory of Gwen and Bill, who died in January.

Born Dec. 4, 1928, in Lebanon, Pennsylvania, Gwen was the daughter of Milton and Margaret Hamilton. The family soon moved to Reading, where her father was chairman of the history department at Albright College. Gwen started piano lessons when she was 6, and soon became good enough that she went regularly to Philadelphia for instruction.

Gwen graduated from Reading High School in 1946 and from Swarthmore College in 1950 with a history degree. She then enrolled at the Yale School of Music, completing a bachelor’s degree in 1952 and a master’s degree in 1955, after teaching music for two years at the Emma Willard School in Troy.

After earning her master’s degree, she spent a year in France studying piano with Nadia Boulanger in Paris and Fontainebleau. Upon her return, Gwen became an assistant professor of music at Vassar College, starting in 1956. Over the years, Gwen also studied piano performance with Arthur Hice in Philadelphia, Bruce Simons at Yale, Edward Steuermann in Salzburg and New York City, and Adele Marcus in New York City.

On June 18, 1966, in Pleasant Valley, Gwen married William Stevens, an IBM engineer. Gwen left Vassar to raise a family and teach piano privately. Over the years, she had many excellent students. The most prominent of these is Keith Lockhart, conductor of the Boston Pops Orchestra. Gwen served for several years as the organist of St. Nicholas on the Hudson Episcopal Church in New Hamburg, where she organized a children’s choir. She was also on the board of St. George’s School in Poughkeepsie.

In 1985 it came to Gwen’s attention that young professional musicians lacked opportunities to perform in intimate venues. This caused her to organize Patrons for Young Artists to sponsor house concerts.

A few years later, in 1993, after discovering the Howland Cultural Center in Beacon and its fine acoustics, she and Bill organized the Howland Chamber Music Circle. She served as music director and her husband as concert manager for 23 years before their retirement in 2016.

Memorial donations may be made to the Gwen and Bill Stevens Memorial Fund to fund the Sept. 16 concert, Hudson River Housing or the American Friends Service Committee.