The best-known postcard of Beacon is probably “Bank Square, Five Corners, Fishkill-on-Hudson, N.Y.,” an 1880 scene that was a favorite of the photographer Walker Evans, who owned thousands of postcards and preferred those with classic Main Street scenes. It accompanied an article he wrote for the May 1948 issue of Fortune in which he described it as the “epitome of Yankee utilitarianism in subject, in execution and in mood.” 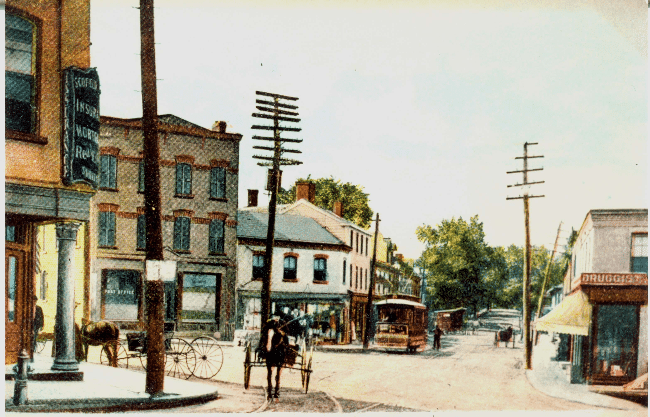 In 2009, the postcard was part of an exhibit of Evans’ collection at the Metropolitan Museum of Art. It didn’t credit the photographer, but the image was taken by Harry Van Tine of Beacon for his father’s postcard business at the Van Tine stationery store. Van Tine later became head of the Washington photographers’ press corps.

It was a winter so relentlessly cold that men now old remember their uncles and fathers calling it the first and only time they ever walked across the Hudson. The year was 1934, and one February morning the thermometer bottomed out at minus 34 degrees, a record still intact. For the first time since 1920, the river froze solid, and on Feb. 15 and 16, more than 500 people walked to Newburgh and back. 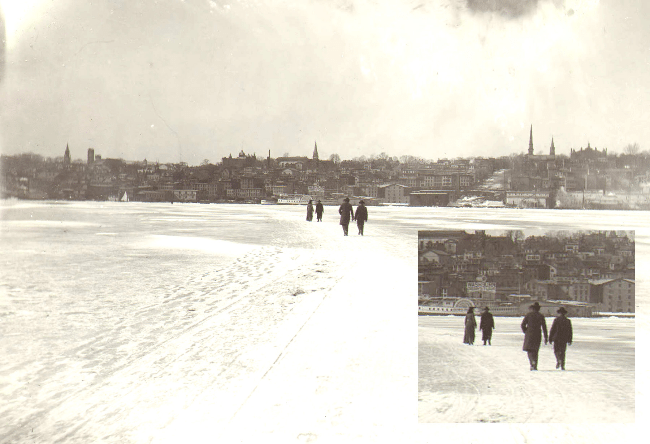 Walking across the frozen river to Newburgh in the late 1800s. (BHS)

Jacques “Jack” Brunel, a Canadian-born skiing enthusiast, dreamed of skiing on Mount Beacon in August. In the summer of 1956, his dream came true when skiers in bathing suits and shorts schussed down man-made slopes covered with artificial snow. 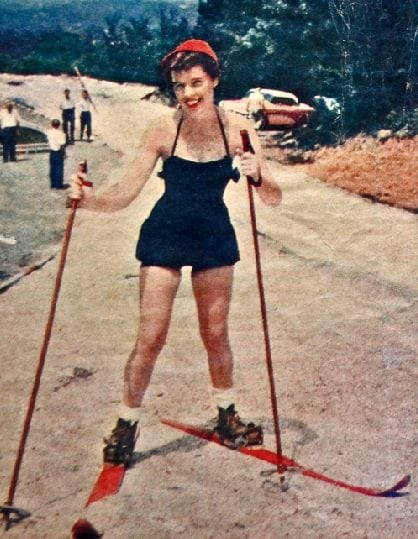 In this 1956 photo from the Daily News, Elizabeth Crowley of Long Island begins her day of summer skiing on plastic at Mount Beacon. (BHS)

A ski jumper and instructor by talent and trade, Brunel moved to Beacon after serving in World War II. He built a small ski jump near the Mount Beacon Incline’s base station. His “snow” was ground plastic placed over surplus nylon parachutes placed on cotton batting. (Brunel later patented this as an “artificial skiing mat.”)

Gordon Ticehurst, a friend of Brunel, recalled that Brunel obtained poker-chip seconds from a factory in Cold Spring, along with plastic shuttlecocks used in badminton, for his plastic mixture. The batting came from Atlas Fibers in Beacon. The colorful mix of reds, pinks and whites proved a passable substitute for snow, and skiing in 90-degree weather had come to Beacon.

St. Andrew’s Church has an overlooked treasure: 19 Tiffany stained-glass windows created in 1900. The most beautiful, to me, is the Rider Memorial Window, called the “Resurrection Angel.” It was donated to the church by John Rider as a memorial to his wife, Cornelia. 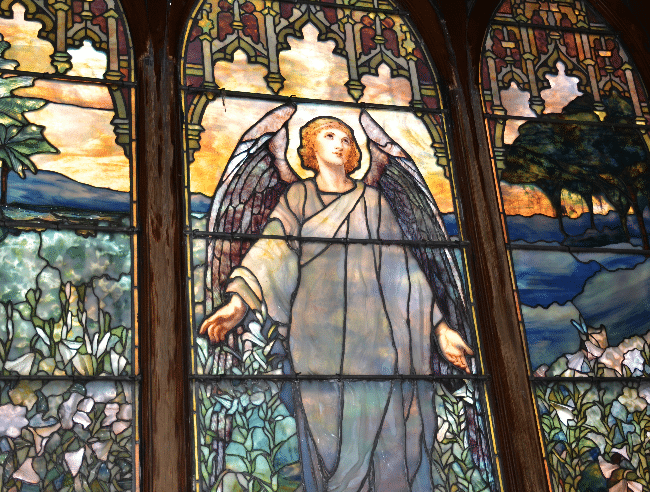 The window depicts an angel looking toward heaven with clusters of lilies in the foreground, both symbolic of the Resurrection. The Sea of Galilee is behind the angel in iridescent blue glass.

There are two other memorial windows at the church, “The Good Shepherd” and “Saint Andrew,” along with 16 with geometric designs.

When Frank Gaylord of Barre, Vermont, sculpted in clay his 19 soldiers for the Korean War Memorial in Washington, D.C., he clothed the American infantrymen in wind-blown ponchos to recall the cold, wet, miserable conditions the men experienced while fighting. 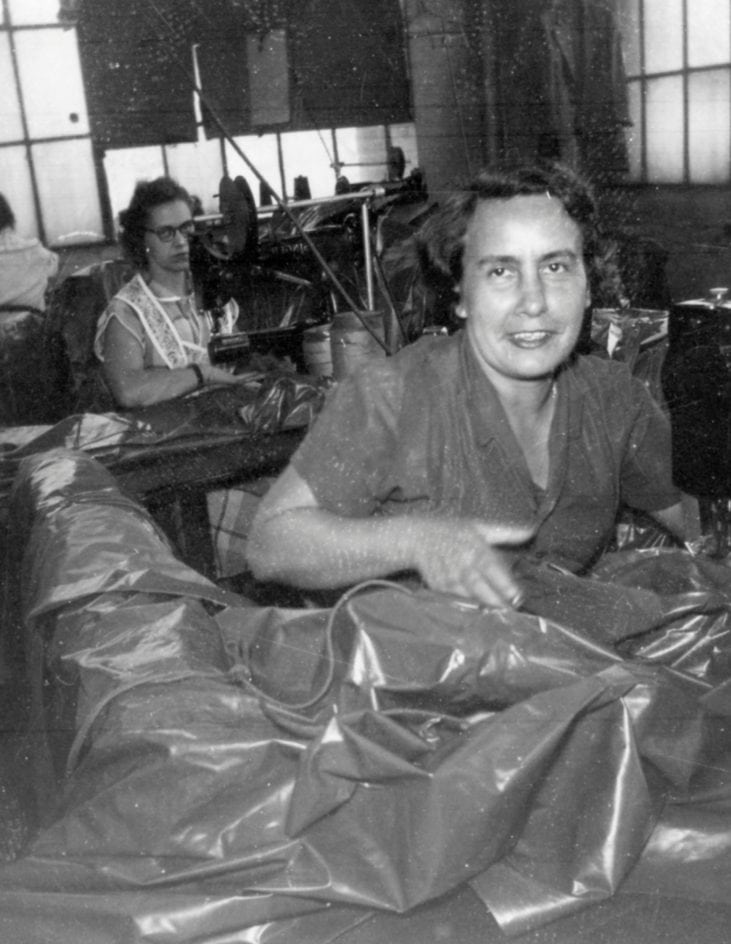 Anna Tomanic sews a poncho at the Bobrich factory in 1952. (BHS)

What a coincidence, then, that the stainless steel, 7-foot-tall sculptures were cast at the Tallix Foundry in Beacon — the same city where the real-life counterparts to the ponchos were manufactured during the war.

They were made by the Bobrich Manufacturing Corp. at 1 East Main St., which had been incorporated around 1943 as a subsidiary of the Debway Hat Co. Bobrich jumped into production for World War II with the manufacture of electrically heated flying suits for the Army Air Force.

By 1945, Bobrich employed 700 workers (mostly women) who sewed the clothing or assembled the electronics for the flying suits that would keep U.S. bomber crews warm in subzero flying temperatures. Management’s solution to the wartime manpower shortage was to establish an in-house nursery for children ages 2 to 6, staffed with a nurse. A playground was installed next to the factory. 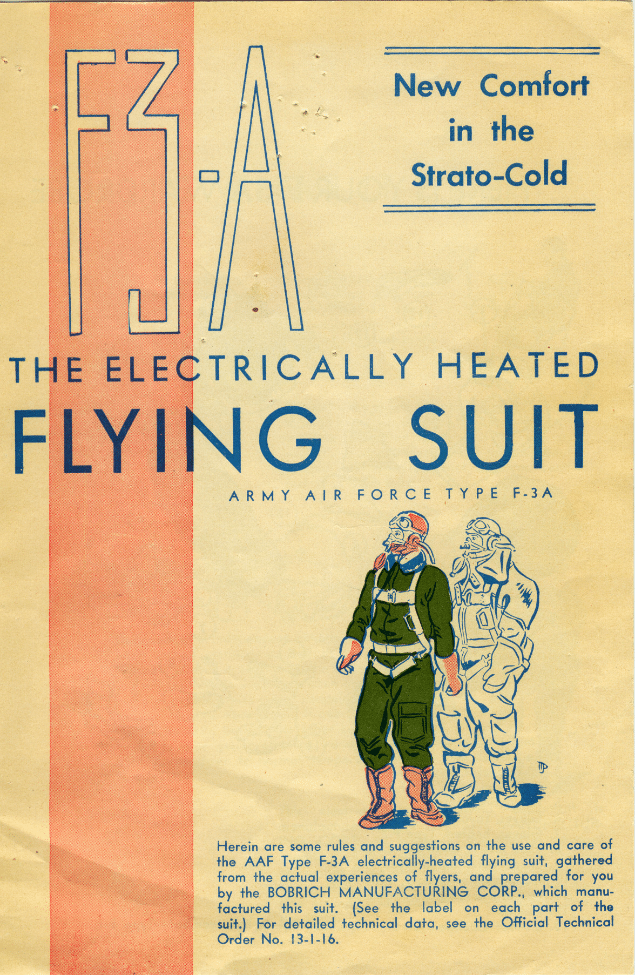 After the war, the company switched production to electric blankets for the civilian market until 1952, when the Korean War began. In July of that year, sewing-machine operators at Bobrich scurried to fill orders for 400,000 ponchos.

Made of nylon with a hood, the gear was cut full-bodied, allowing the soldier to keep his weapon dry. The ponchos also could be used as a sheet, blanket or personal tent. When Frank Gaylord outfitted his U.S. soldiers in ponchos, he created a lasting bond between Beacon and the Korean War Memorial.