Trustee Lynn Miller reported at the Aug. 7 Cold Spring Village Board meeting that seven coyote cutouts, created by teenagers as part of a Butterfield Library summer program and placed in the outfield grass on Aug. 4, have so far helped keep the troublesome birds away. 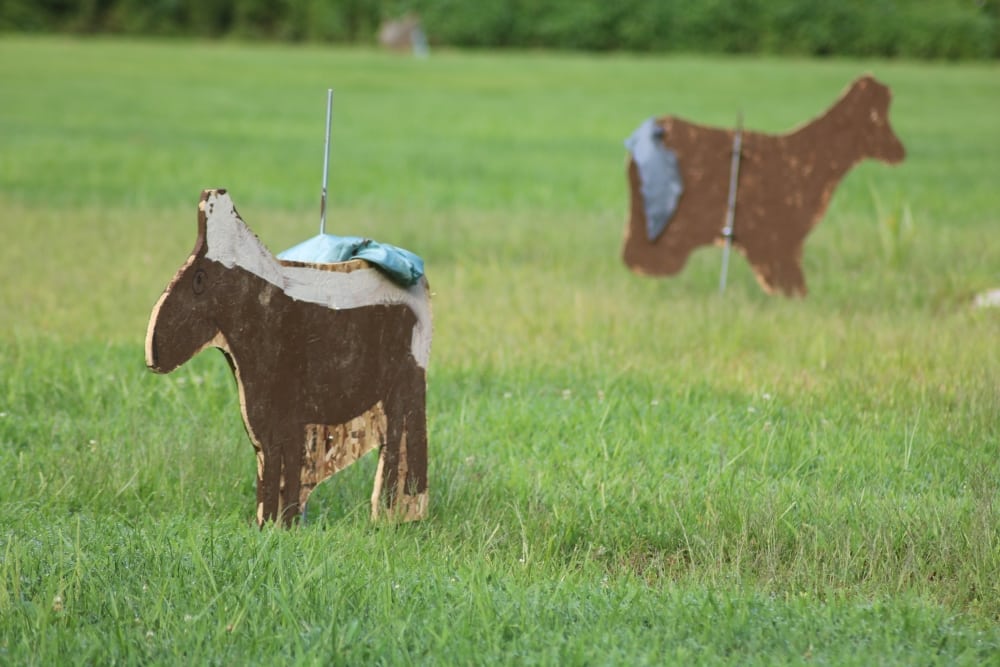 Coyote cutouts have been placed at Mayor’s Park in an attempt to keep geese at bay. It seems to be working. (Photo by M. Turton)

“It’s nothing like the dozens of geese we’ve seen previously,” Miller said. On Aug 8, Greg Phillips, the superintendent of water and wastewater, said he had not seen geese in the park for several days.

Canada geese, and their droppings, have posed a problem at the park for many years, as they have across the country in areas that feature fertilized, manicured lawns.

Residents of Church Street and Furnace Street each agreed to change the dates of block parties they had planned to hold on Labor Day after trustees raised traffic concerns.

Mayor Dave Merandy reported that he signed the final agreement with the state Department of Parks, Recreation and Historic Preservation on Aug 1 to designate the village as manager of Dockside Park.

Former Trustee Bruce Campbell has been hired as a park maintenance worker for the Recreation Department. Campbell had been chairing the Recreation Commission but resigned to take the position. He will work 24 hours a week through Oct. 26.

The board awarded Sal Pidala and Sons Excavating of Cold Spring the contract to pave Market Street after it submitted a low bid of $14,110.

Dockside Park will play host to the seventh annual Paddle for a Cure on Sept 8. As many as 100 kayakers, stand up paddle boarders and canoeists are expected to take part in the six-mile paddle to and from Bannerman’s Island. The event will benefit the Support Connection of Yorktown in support of breast cancer research. The event is sponsored by the Hudson River Watertrail Association and organized locally by Cold Spring’s Matt Kane, owner of Prime Paddlesports.

Village Accountant Michelle Ascolillo reported that the recent audit of village finances for 2017-18 produced no unfavorable results. Auditors will submit their report in September.

One thought on “Geese vs. Coyotes”